Cop apologises to colleague’s wife for shooting him by mistake 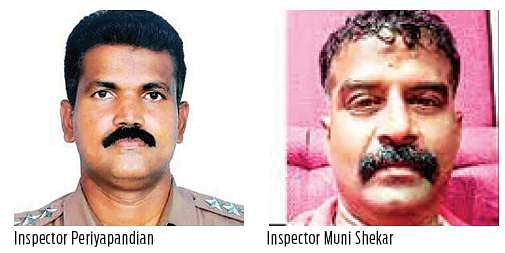 According to sources, Kolathur Inspector Muni Shekar and four other policemen, who were part of the special team formed to nab the robbers, met Banurekha and the family of Periyapandian on December 17, at their house in Saalaiputhoor, Tirunelveli.

The sources said that Banurekha and other family members had requested Deputy Inspector General of Police (DIG) (Tirunelveli Range) S Kapil Kumar Saratkar to meet Muni Shekar and team to get to know what really happened as there were contradictory reports doing the rounds. It may be recalled that the initial reports from Rajasthan suggested that Periyapandian was allegedly killed by the burglars. However, it was later said that Muni Shekar had accidentally shot at Periyapandian during the encounter.

Speaking to Express, S Joseph, younger brother of Periyapandian said, “Confused about the contradictory reports regarding my brother’s death, my sister-in-law requested the DIG to meet Muni Shekar. He was teary-eyed and admitted that he mistakenly shot my brother when trying to shoot one of those who had attacked the police.”

According to the family members, the police team narrated the entire incident and explained how the encounter turned tragic. “The police told us that based on a tip-off from a person who claimed that only three burglars were hiding in the spot, the team, including my brother, went to the hideout in a jeep at midnight. On their way, they reportedly detained two more persons. On reaching the spot, my brother who was the first to sneak inside said he saw a few women and a child residing inside.

He was followed by the others, including Muni Shekar. In a sudden turn of events, more than 10 members started attacking my brother. The police told us that some of them also came out and started attacking them. However, Muni Shekar went inside and there he accidentally shot my brother when aiming at another.”

When asked why Muni Shekar did not shoot anyone else and delayed admitting that he had accidentally shot Periyapandian, Joseph said, “We asked the same questions to Muni Shekar. He said he was dismayed and shocked at having shot my brother and that his conscience drove him to take my brother to a hospital immediately to try and save him. He also said that he initially felt insecure about divulging the actual incident as he feared it may be misinterpreted.”

How it began
The family members said that the police told us that based on a tip-off from a person who claimed that only three burglars were hiding in the spot, the team, including my brother, went to the hideout in a jeep at midnight. On their way, they reportedly detained two more persons