CHENNAI: “It will be sufficient if the Centre retains only such powers as are necessary for preserving the unity and integrity of the country leaving adequate powers to the States,” said C N Annadurai, the architect of Dravidian politics, on April 8, 1967.

That was the year DMK captured power in the State. More than half a century has passed since then, and two major Dravidian parties have been continuously ruling Tamil Nadu, barring the Emergency.
Yet, the State government cannot offer admissions in its own medical colleges in the manner it wants to, but only based on the rules set by the Central government. In fair price shops, it has to limit supplies to comply with the conditions laid down by the Centre. The electricity it supplies will be on terms set by the Centre under the UDAY scheme. Even urban civic projects under the Smart Cities plan would have to be cleared by the Centre.

Sanitation, which is the most mundane job of local civic bodies, too has a Central component under the Swachh Bharat scheme. Incidentally, most of the schemes had Hindi names whose meaning is not easy to comprehend for the Tamil speaking populace.

The year that is about to end would perhaps be remembered as one where Tamil Nadu compromised its position as the epicentre of the battle for State autonomy. It started in the fag end of 2016 after the late Chief Minister J Jayalalithaa fell seriously ill and was hospitalised. Jayalalithaa was a firebrand leader who never allowed the Centre to encroach upon the rights of the State government and raised her voice always, and on some occasions, she even wrote to Chief Ministers of other states to stand united on such issues.

When she was being treated at Apollo Hospitals, the aberration started with the State government accepting to implement the National Food Security Act (NFSA), which went against the universal public distribution system that was successfully implemented for decades and acted as a pioneer to other states in this regard.

Though the State government headed by Edappadi K Palaniswami and O Panneerselvam gave administrative reasons for accepting the NFSA and UDAY schemes, they drew bitter criticism from the opposition. Jayalalithaa had opposed the NFSA since it was proposed during the Congress-led UPA regime and she protested against UDAY tooth and nail. Jayalalithaa wrote letters to successive Prime Ministers cautioning them not snatch away the powers of the State government under any pretext. When the NFSA was accepted by Tamil Nadu government in November last year, the government categorically said its implementation would not affect the quantity of goods supplied through ration shops. But later urad dal supply was stopped to family card holders while the price of sugar given to card holders was increased.

A few academics think the problem started with DMK. “DMK played a key role in fighting for State autonomy. In 1970s, the State government headed by former Chief Minister M Karunanidhi appointed the Rajamannar committee on Centre-State relations and became a pioneer for many other states in this regard.

The recommendations of the committee had created a turmoil in the Centre and they were seen as a milestone in seeking autonomy for the States. After playing such a progressive federal policy, DMK compromised after they got were accommodated in Union government as coalition partners,” C Lakshmanan of Madras Institute of Development Studies said.

The National Eligibility-cum-Entrance Test (NEET) for medical admissions also created a row over the Central government infringing upon States’ rights. Education was originally in the State list but was later moved to Concurrent List by the Centre and the demand for restoring it to State list is growing.

Because of this one reason, students of Tamil Nadu have been suffering a lot for the past few years. And 2017 became an unforgettable year with the suicide of 17-year-old Dalit girl, S Anitha, who had scored 1,176 out of 1,200 marks in her Class XII State Board examinations but could not join MBBS due to poor score in NEET. Anitha’s death shook the State.

The Prevention of Communal and Targeted Violence (Access to Justice and Reparation) Bill, 2011, National Counter Terrorism Centre (NCTC) and Dam Safety Bill were among the many issues on which Jayalalithaa never hesitated to raise her voice against the Centre.

A few months after the demise of Jayalalithaa, an unprecedented incident took place at the seat of power — the Secretariat in December 2016. IT sleuths searched the office of the then Chief Secretary P Rama Mohana Rao for hours, just as a simultaneous search was going on at his residence. The search took place when the then chief minister O Panneerselvam was sitting in his office a few yards away. But there was no opposition from him.

During her tenure, Jayalalithaa opposed many provisions of the GST Bill and forced the Central government accept many provisions to safeguard the interests of the State. After her demise, opposition from the government side petered down to requests.

The biggest threat to State autonomy perhaps came when Governor Banwarilal Purohit started meeting the State government officials and reviewing the progress made in the welfare schemes. To the shock of everyone, Chief Minister Edappadi K Palaniswami and his ministers just said: “Take it easy. After all, the Governor is functioning well within his powers.”

Some ministers tried to justify the act of the Governor saying he did not pass any orders to officials or take decision while the Opposition raised their voice in a big way, saying Purohit was interfering in the State administration. But for Purohit, meeting officials was not new. When he was the Governor of Assam, he did the same and even blamed the local government for not performing well. As for Purohit, inspections in Tamil Nadu were an exercise in continuity.

Unfazed by the protests, Purohit stood his ground and declared that he would continue to meet officials and visit all districts by and by. While the leaders of BJP stoutly supported the Governor’s meeting with officials, the Opposition accused that BJP, with negligible presence in Tamil Nadu, was trying to rule the State through the Governor.

When the Governor went to Cuddalore district, DMK and VCK cadre showed black flags. But the Governor continued to justify his visits, quoting profusely from the Constitution and arguing that he had all powers to meet officials. While a war of words between the BJP leaders and the Opposition was on, the ruling party took it easy. However, the BJP leaders had no convincing answer to the question posed by the Opposition: “Will your Prime Minister allow President Ram Nath Kovind to do a Purohit in all states?’ Also, they could not answer a similar question as to whether Governors in BJP-ruled states would be allowed to conduct similar meetings with State government officials. 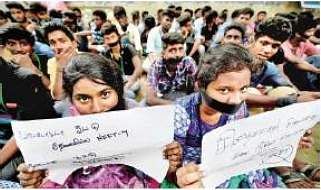 No other issue perhaps brought out popular resentment against the Centre like NEET. With Centre pushing for a common entrance exam based on CBSE syllabus, students of Tamil Nadu’s government schools suffered a huge blow. The death of Anitha, a young medial aspirant who committed suicide, sparked massive protests against the Central government

Now we are on Telegram too. Follow us for updates
TAGS
tamil nadu economy Year with TNIE 2017 with TNIE