CHENNAI: The results of the Tamil Nadu Eligibility Entrance Test (TNTET) released earlier this week threw up a shocker as a whopping 95 per cent of the candidates failed to clear it. Out of the 7.53 lakh candidates who took TNTET this year, only 34,979 managed to pass.

Candidates with a Bachelor’s degree (BA/BSc/BLit) and a Bachelor’s Degree in Education (BEd) were eligible to take Paper II, while even those with diplomas could sit for Paper I exam.

The results released on July 1 showed that nearly 4.93 lakh graduates failed to secure the minimum marks (90 out of 150)  required to clear Paper II. Most of them failed in science and mathematics, as the success rate of candidates from these streams was only 2.72 per cent.

On the other hand, close to 2.25 lakh aspirants for the post of secondary grade teacher who took Paper I failed to obtain pass marks.

Though there was a spike in the total number of candidates compared to the previous years, the outcome was similar. Results of the tests conducted in 2012 created a huge controversy as only 0.34 per cent of the candidates cleared it.

A supplementary test was conducted immediately following widespread protests from teacher associations and political parities. However, only 2.9 per cent passed the supplementary test.
There has been a marginal increase in the performance of candidates by 0.09 per cent though. Experts opined that the overall performance was way below par. They blamed the teacher training institutes for the crappy performance.

Former Tamil Nadu Teacher Education University Vice-Chancellor G Viswanathan said a specialised paper named ‘Teacher Proficiency’ introduced by him solely based on TET content was scrapped by the university on his retirement in 2015.

“The content in the psychology subject had been diluted of late. This year many questions in TET were based on psychology,” he added.

Another school education department official said that though teachers at private teacher training colleges were qualified, they were not paid well and were forced to handle seven or eight classes in a row. Ideally, a teacher can handle only four or five classes a day. 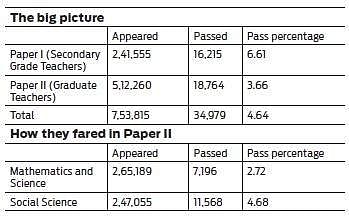 Now we are on Telegram too. Follow us for updates
TAGS
TN Teacher Test exam fail candidates