Lamenting that the Sri Lankan Navy had detained as many as 14 Tamil fishermen who set sails from Ramanathapuram and Pudukottai districts, Chief Minister ‘Edappadi’ K Palaniswami on Monday said that th

CHENNAI: Lamenting that the Sri Lankan Navy had detained as many as 14 Tamil fishermen who set sails from Ramanathapuram and Pudukottai districts, Chief Minister ‘Edappadi’ K Palaniswami on Monday said that the recurring attacks showed the island nation’s ‘intolerant attitude’ and ‘scant respect’ for the Indian diplomatic efforts. 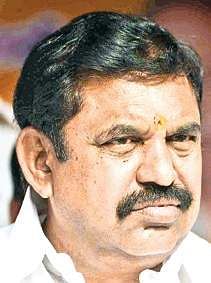 Drawing Prime Minister Narendra Modi’s attention to the ‘distressing spate’ of recent unprovoked attacks, he said 11 fishermen from Rameswaram and three others from Kottaipattinam were detained by the Sri Lankan Navy in the late hours on Saturday.

Palaniswami slammed these frequent instances, saying that they had a demoralising impact not just on the fishermen but also on the people of Tamil Nadu who strongly believe that the fishermen have a genuine claim to the Palk Bay fishing grounds from where they were being apprehended.
Saying the Tamil Nadu government is taking various  steps to convert the trawling boats into long liners and gill netters in the shortest possible time, he said this transition would take time.

“The Sri Lankan policy of abduction of boats in this transition period without respite only indicates its increasing intolerant attitude and scant respect for the Indian diplomatic efforts,” he said.
Pointing out that the island nation had not released any of the fishing boats impounded since January, 2015, Palaniswami urged the Prime Minister to take up the issue with the higher authorities in the Sri Lankan government and ensure immediate release of the 42 fishermen and all the 141 boats, including the 14 fishermen and their three boats caught on Saturday.