PUDUCHERRY: Chief Secretary Manoj Parida has been transferred to New Delhi, with Ashwani Kumar replacing him. The Union Home Ministry issued the orders in this regard on Thursday, according to a notification posted on the ministry’s website.

Parida is an officer of the 1986 AGMU (Arunachal Pradesh, Goa, Mizoram and Union Territory), while Ashwani Kumar is a 1992 batch IAS officer of the same cadre. Development  Commissioner G Narendra Kumar (AGMU 1989) was also transferred to New Delhi. In his place, A Anbarasu (AGMU 1996)   was posted. 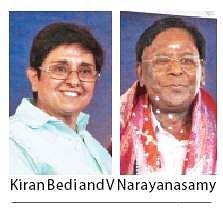 Though transfer of officials is routine, the present one is particularly significant in the backdrop of the tussle between Lieutenant  Governor Kiran Bedi and Chief Minister V Narayanasamy. Bedi had taken up the issue of transfer of Parida with Union Home Ministry for a long time, alleging that the Chief Secretary was functioning in support of the elected government. It seems the efforts of Bedi have finally paid fruits.
However, Parida denied there was any political background to his transfer and said he himself had requested for it.

“It is very difficult to work when two constitutional authorities are fighting and officials are badly sandwiched. The tenure of a Chief Secretary in Puducherry is two years. But I have already put in two-and-a-half-years here,” said Parida.

It seems the transfer took some time as officials were reluctant to come to Puducherry and risk their careers. Finally, a relatively junior officer, six years junior to Parida, was posted as Chief Secretary.
Development Commissioner-cum-Education Secretary Narendra Kumar proceeded on leave after writing to Chief Secretary to be relieved from the education portfolio, following the filing of an FIR against him by the CBI on a complaint from Bedi over the medical admission scam. Kumar came under the CBI scanner as he was the Centac chairman, though he was not directly involved in medical admissions, which is dealt by health secretary.

Anbarasu, who will take charge as development commissioner,  had earlier served the administration as Secretary, Industries and Local Administration. He had also served as Secretary to V Narayanasamy, when he was the Minister of State in the Prime Minister’s Office. Many more IAS officers have sought transfer out of Puducherry in view of the power struggle.