Income Tax officials raided 187 places belonging to the close aides and relatives of AIADMK rebel faction's TTV Dhinakaran and Sasikala, including the office of Tamil channel Jaya TV in Chennai.

CHENNAI: Jaya Harini, the abode of sidelined AIADMK leader TTV Dhinakaran, is bustling with activity since Thursday morning as party cadres start gathering near the residence to show their solidarity.

The house was one of the few premises belonging to Sasikala's extended family, but was not touched by the Income Tax department as raids were conducted in 187 places belonging to the close aides and relatives of Dhinakaran and Sasikala.

Dhinakaran, who emerged out from his home, said his house was not raided by the Income Tax but some of his properties including a farm house in Puducherry were raided by Income Tax department due to political vendetta by the present government. He alleged that the raids are part of the Centre's tactics to get him and jailed AIADMK leader VK Sasikala out of the AIADMK party. "It's been orchestrated by the Centre. But I will not bow down," he said.

However, Income Tax department denied that the raids have anything to do with politics. “It is part of Operation Clean Money Drive which was launched in Tamil Nadu,” said a senior Income Tax official.

“We had identified 10 groups who were owning shell companies and have made large deposits in the banks. The raids are being carried out in 187 places,” he said.

Some of the key places that were raided by the IT today are office of Jaya TV, a place near the Poes Garden residence of former Chief Minister J Jayalalithaa where once JJ TV operated from, a house of Krishna Priya, the daughter of Ilavarasi located in Habibullah Road and several business houses and shell companies and the premises of aides close to Dhinakaran, jailed AIADMK leader Sasikala and her brother Divakaran.

The official said that almost all premises belonging to associates of Divakaran were raided in Mannargudi. The house of Krishna Priya, the daughter of Illavarasi, where Sasikala stayed during her parole, was also raided by Income Tax department.

Jaya TV, started by former Chief Minister J Jayalalithaa in 1999, was a mouthpiece of the AIADMK. Members of Sasikala’s family have been controlling the operations of the media house for many years now.

Sasikala’s nephew Vivek Jayakumar, son of Ilavarasi who is also in jail, currently manages the affairs of the TV channel. Vivek also controls Jazz Cinema, which is also under Income Tax scanner.

“We raided Krishna Priya’s house as she is the one who is controlling the entire shell companies,” said the Income Tax official. He said that large number of incriminating documents were seized from there.

However, AIADMK spokesperson Prasanna Alagarsamy said that TTV Dinakaran was expecting the raids a week earlier. “The raids happened a day after Dhinakaran met Sasikala in Bengaluru jail and spoke against the demonetisation,” alleged Prasanna.

“We will evolve a strategy once the raids get over,” said a support of Dhinakaran.

TIRUVARUR: A huge posse of police, led by Deputy Superintendent V Asokan, was deployed as I-T officials conducted raids on the premises of Sasikala’s close relatives in Mannargudi on Thursday. Raids were conducted at 12 places, including the residences of Sasikala’s brother V Dhivakaran and his associates. The officials also raided the premises of the relative of Food Minister R Kamaraj and one of his supporters.

The officials came in a 14-car convoy from Tiruchy and entered Dhivakaran’s house situated at Sundarakkottai around 6 am. Simultaneously, raids were conducted on the arts college owned by him nearby. Officials who searched the house of Dhivakaran took him to another house at Mannai Narayanasamy Nagar in Melapalam.

Searches were also conducted at the houses of his sister and Dhinakaran’s mother Vanithamani, Dhivakaran’s friends Sujai and Selvam, former councilor S Rajupillai, Dhivakaran’s assistant Vinayakam and staff of the college Anbarasi, Siddharthan and Balamurugan.

He was taken back to Sundarakkottai. The search continued till evening and it was not known immediately whether any documents were seized. Addressing media, Dhivakaran alleged that the raid was politically motivated.

The officials also raided the house of Pon Vasukiram, district secretary of Amma Peravai and supporter of minister Kamaraj, and minister’s relative S Udhayakumar. Since S Kamaraj, TTV faction district secretary, was out of town, his house was not searched. However, officials waited there after informing Kamaraj. In Thanjavur, raids were carried out on seven premises, including Sasikala’s husband M Natarajan’s house.

A team of I-T officials from Madurai, Tirunelveli and Thoothukudi searched Natarajan’s house at Arulananda Nagar. Though Natarajan was not present in the house, officials searched the premises in the presence of his relatives and servants.

Officials also searched the residence of Sasikala’s nephews T V Mahadevan, who passed away recently, T V Thangamani, and Dr S Venkatesh, who is Dhinakaran’s brother-in-law. Venkatesh was not present in the house and the search was held in the presence of his relatives. The residence of Chinnaiah, Natarajan’s nephew, located at Melavasthachavadi was also searched.

How was Operation Clean Money Drive carried out?

CHENNAI: Tamil Nadu had escaped the operation clean money drive, which was launched by Prime Minister Narendra Modi to crackdown on unaccounted money piped into bank accounts post-demonetisation, as Income Tax officials were waiting for the stash money declaration window offered by the government to end in October.

“We waited till October as the government had come up with a scheme, Pradhan Mantri Garib Kalyan Yojana (PMGKY). Under the scheme, people who are likely to deposit black money need to pay 30 pc of tax amount and also excess of 33 pc as surcharge amount,” said a senior Income Tax official.

It is learnt that under the PMGKY, only Rs 5,000 crore was disclosed by 21,000 people across the nation. Till now a total of Rs 2,451 crore has been collected in the drive.

The official said that there was also a column under the scheme wherein individuals have to disclose how much cash they have deposited post-demonetisation from November 8, 2016 to November 2017. Once the scheme ended, the operation was launched in Tamil Nadu, the official said.

Under operation clean money, the Income Tax department had appointed two data analytics firms to analyse the deposits in bank accounts before and after November 8 last year, the day the government decided to junk 86 per cent of the currency in circulation. It is learnt that there are about 5,56,000 individual tax evaders identified under the drive across the nation.

Taxmen take locksmiths’ help
Faced with a locked house and the standard “do not know whereabouts of owner” replies, I-T officials who arrived to search the house of Dr K S Sivakumar at Rakja Colony in Cantonment in Tiruchy, decided to press locksmiths into service

Former physician of Jaya
Dr Sivakumar was the personal physician of former Chief Minister J Jayalalithaa and is married to Prabhavathi, daughter of Sasikala’s elder brother Sundaravadhanam. But Sivakumar’s friends and relatives, who came to the spot, objected to breaking open locks on other doors, leading to delay in conducting the search

Keys arrive
Later, one of Sivakumar’s friends came with the key following which officials entered the premises. Earlier, officials searched the house of G Kaliyaperumal at Ayyapa Nagar near KK Nagar. Kaliyaperumal is a former Highways official and his son Karthik is married to J Krishnapriya, Sasikala’s niece 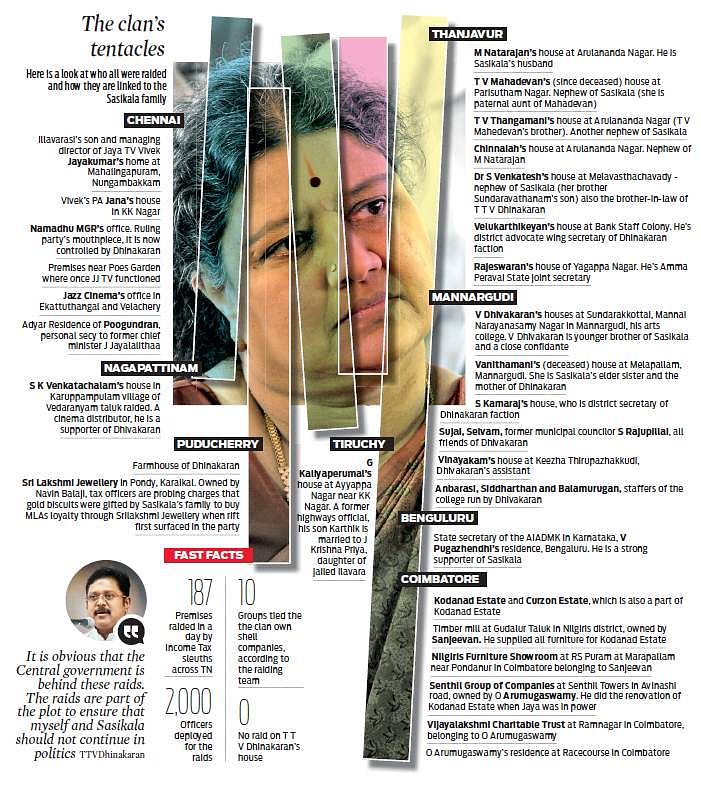 CHENNAI: Even as Income Tax officials were conducting searches on the premises of family members of V K Sasikala who is now in a Bengaluru prison, the DMK sounded cautious, while ally Congress described the action ‘politically motivated’.

“What happened to those searches? What is the status? What action has been taken?” he asked adding there was no answer to these questions.

He said his impression was that the present searches too would meet the fate of the earlier ones.
He wanted the Union minister under whom IT department fell and the departmental authorities to give an explanation to the searches.

“You must ask the minister holding charge of IT department and IT officials for an explanation on the raids,” he told reporters, replying to a question.

Tamil Nadu Congress Committee president S Thirunavukkarasar said the IT department action was nothing but ‘political vendetta’. He said the searches were held with a ‘political motive to weaken a faction of AIADMK’.

VILLUPURAM: With Income Tax Department launching statewide raids on the premises of former CM J Jayalalithaa and jailed AIADMK leader V K Sasikala, Bhoomiyarpalaym village near Auroville in the district also saw some action with a farmhouse belonging to TTV Dhinakaran coming under scanner. The day-long raid went on till late evening.

A team led by Assistant Commissioner Sengutuvan came to the farmhouse around 8 am and was inside the premises for 13 hours. Later, two officials came out and informed that only higher officials can talk about the raid and left the place. One more official entered the premises in the evening.

Meanwhile, Dhinakaran loyalists led by Villupuram district north secretary Balasundaram and former Vanur MLA Ganabathy gathered in front of the farmhouse and raised slogans against both Central and State governments. They claimed the raid was an act of revenge.

COIMBATORE: Sleuths from the Income Tax department also swooped down on the sprawling Kodanad Estate in Kothagiri and searched its office. Under the scanner were people, who supplied furniture and extended favours to jailed VK Sasikala and her family, when former chief minister J Jayalalithaa was in power.

Nearly 20 sleuths landed on the estate around 6 am in two cars and a van and carried out the search operation for over six hours. The inquiry with office-bearers and employees hinged on fund flow to the estate and their salaries. However, after the operation, the sleuths trooped out empty handed.

Simultaneous search operations were carried out in the house of O Arumugasamy, a sand businessman and chairperson of Senthil Group of companies, at Racecourse in the city. They also raided Arumugasamy’s office in Senthil Towers on Avinashi Road. The I-T sleuths also paid Vijiyalakshmi Trust Office, owned by Arumugasamy, at Ram Nagar.

According to sources, when J Jayalalithaa was in power, Arumugasamy became close with VK Sasikala and allegedly favoured her by carrying out renovation of the Kodanad Estate building.

I-T officials also searched the house of furniture showroom owner Sanjeevan at Gudalore and his Nilgiris showroom at RS Puram and Podanur in Coimbatore.

According to sources in the AIADMK, Sanjeevan executed the interior works in the Kodanad Estate building after it came into the possession of J Jayalalithaa. “He is the only person from outside, who knows the entire geography of Kodanad Estate. He is the person always roped in to carry out repairs, no matter how minor,” sources added.