Figured out, fact and fiction on five-day raids on Sasikala clan

187 premises of Sasikala clan raided but only 650-650 presonnel involved, not 1,800 reported by a section of media

CHENNAI : For five days we were fed various figures on I-T raids on the Sasikala clan. It’s time for a reality check.Yes, 187 premises of the clan were raided across Tamil Nadu and the neighbouring States; and yes, over 100 bank accounts have been frozen. But no, the raiding party put together did not have 1,800 members, not even half of that. It actually had 600-650 personnel. And no, there is no tunnel in rebel leader TTV Dhinakaran’s farmhouse near Auroville, contrary to speculation in a section of the media. 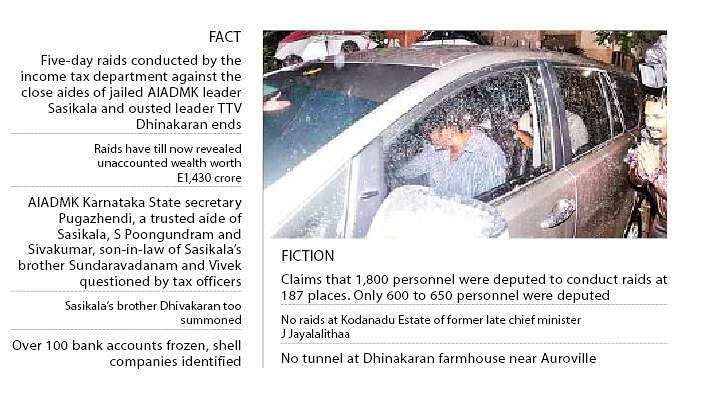 “We usually send two officials along with two witnesses. It is true that raids took place in 187 places but only 600 to 650 personnel were involved and not 1,800,”said a official tied to the operations. The source also said that after raids his office is sending reports to the headquarters. He also laughed at reports that raids are being conducted at Kodanadu. “We never conducted any raids in Kodanadu Estate and media is reporting that raids are still continuing there,”he said.

What is true, however, is that the IT officers found documents on unaccounted wealth running into hundreds of crores. Three loyalists and members of the clan were questioned on Monday - AIADMK Karnataka State secretary Pugazhendi, a trusted aide of Sasikala, S Poongundram and Sivakumar, son-in-law of Sasikala’s brother Sundaravadanam. Pugazhendi arrived at the I-T office at 11.30 am and was questioned for nearly two hours.

Now we are on Telegram too. Follow us for updates
TAGS
Tamil Nadu Sasikala TTV Dhinakaran IT raid Jaya TV