A 40-year-old man and his two sons, aged five and three, were found dead on the terrace of an abandoned building in Puthur in the outskirts of Nagapattinam on Tuesday evening.

NAGAPATTINAM: A 40-year-old man and his two sons, aged five and three, were found dead on the terrace of an abandoned building in Puthur in the outskirts of Nagapattinam on Tuesday evening.
Sources identified the deceased as Dharmarajan and his sons Varun and Rasith of Keezhaiyur block.
The deceased had been missing for the last six days. 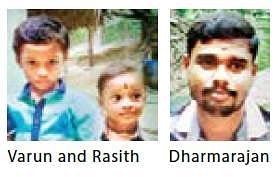 “Locals sensed foul odour, and entered the terrace of an abandoned building and were shocked to find the three dead bodies. Later, it was found that a complaint had been received by Keezhaiyur Police Station last Thursday about the father and sons having gone missing,” said a senior officer.

He added, “Relatives visited the spot and identified the bodies. According to family members, Dharmarajan’s wife was critically ill and admitted to a hospital in Puducherry. A worried Dharmarajan may have forced his sons to take poison before consuming it himself.” A senior police officer in Keezhaiyur station said A few locals said the building was once a Tasmac shop and had been locked since April after a Supreme Court order.