Revision done as TN students found lagging behind those in other States; but teachers say it is old wine in new bottle

CHENNAI: The Tamil Nadu government may have drafted the new curriculum for State board schools, but teachers feel it is more akin to the older syllabus with minor changes. Ruing the fact that stakeholders, who include parents, teachers and students, have been given only 10 days to give feedback on the syllabus, teachers opine that a month’s time should have been given to analyse the draft. The draft has very minor inclusion of NCERT syllabus, they said.

The curriculum is being revised as TN students were found lagging behind their counterparts from other States while competing in national-level exams like National Eligibility-cum-Entrance Test (NEET).
“The syllabus for Classes VI to Class X is more or less the same like that of Samacheer Kalvi,” says SPP Selvakumar, HM of Sethu Bhaskara Matriculation Higher Secondary school at Ambattur.

Highlighting the draft syllabus for Biology, he said that earlier Human Anatomy and Physiology was prescribed for Class XII and now it is part of Class XI syllabus. “In the draft syllabus, they have just highlighted it as the topic. We can give the feedback after seeing how they are going to frame the textbook,” he said. He said the topic on Endocrine System, a collection of glands in the human body, lacks details when compared with CBSE syllabus.

“I have gone through the CBSE syllabus. This particular topic is dealt in more detail. Whereas as per the topic in the draft syllabus, such details are missing. It depends on how they are going to provide more details in the textbook version so that one could get a proper  understanding of both the syllabus,” said Selvakumar.

B Karunakaran, HM, Government Higher Secondary School, Porur, felt that very slight changes have been introduced in the syllabus. “The time period for feedback is short. They should have given at least a month for feedback. I don’t find any drastic change. They should not hurry up and design the syllabus for the upcoming academic session. If required they can give another year or so but the syllabus requires to be different from the previous one,”he said. When ‘Samacheer Kalvi’ was drafted, it took a long time.

Headmaster of Government Higher Secondary School, Lakshmipuram, AR Anand Arason said Chemistry subject for Classes XI and XII doesn’t have much depth. “I don’t find any NCERT element included in the chapters. They have added two lines from NCERT.Earlier, there were total 22 chapters in both classes XI and XII. But, now they have merged and made it 15 chapters each in each class,”he said. 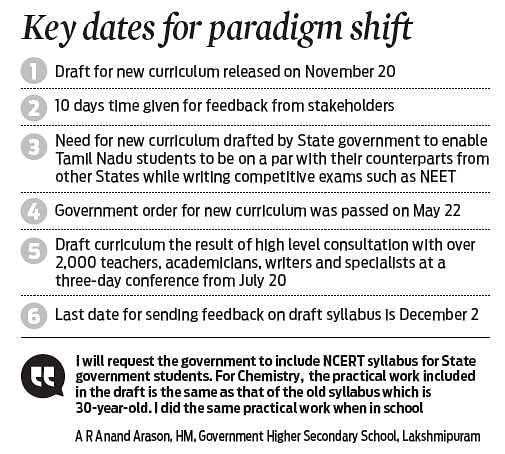