Cities in India face the wrath of bad planning

CHENNAI: The word ‘floods’ has proved to be a popular search term on Google over the past week. Not without reason. There have been significant flooding rains all across the globe – USA, Niger, Bangladesh – and people have resorted to the internet giant to look for answers.

Places in India too have witnessed widespread flooding over the last course of the last week. While one can do little if a city is hit by record rainfall in a short amount of period, it has to be noted that most floods are man-made as ideas like ‘smart cities’ have gripped governments. One of the immediate after-effects of such ideas are rapid, unplanned urbanisation, which gives way to high rises in places where there shouldn’t be one. Floods are the ultimate human cost of urbanisation.

Take for example Hyderabad, one of the most rapidly developed cities in India since the turn of the century. Extreme rainfall events have become common in Hyderabad in the past 15 years. The city’s infrastructure is unable to handle more than 50-60 mm of rain in 24 hours. That is way below the optimal level.

Encroachment of lake beds and drains, inefficiency of the urban development agencies in clearing silt from drains combined with increasing extreme rainfall events are a dangerous concoction in the making in Hyderabad. The city’s storm water drainage, dating back to the Nizam era, does not cover the wider urban agglomeration, and within the core city unchecked concretization is leading to rapid runoff that has no outlet.

Another city that has had a proportional relationship between development and urban flooding is Vijayawada. The city is sandwiched between the Krishna and several hills, so runoff is rapid. Several canals criss-cross the city. As the city grew along the banks of the river and the canals, there has been encroachment on the bunds, which has constricted the canals. This triggers flash floods when there is sharp rainfall in the monsoon months.

The city experienced severe flooding in August 2009 when the Krishna swelled to spate as a result of inflows upstream. Then again in 2015, localities such as One Town, Ajit Singh Nagar, Rajeev Nagar and Kandrika were submerged when there was heavy rainfall. The floods lasted three days, which brought the city to its knees.

A third south Indian city, Kochi, fares better than both the above-mentioned cities even though it gets close to 300 cm of annual rainfail. It’s a well planned city but its officials are warning against resting on their laurels. KJ Sohan, former Kochi mayor and town planning expert, says the city has no cause for complacence. “Mumbai’s flooding ought to be an eye-opener for Kochi,” he says. “On most construction sites now, rules such as vacant space to allow rain water to seep into the soil and roof-water recharge, are being violated. If we get intense rains, Kochi will soon have similar issues that we are seeing in Mumbai today,” Sohan said. 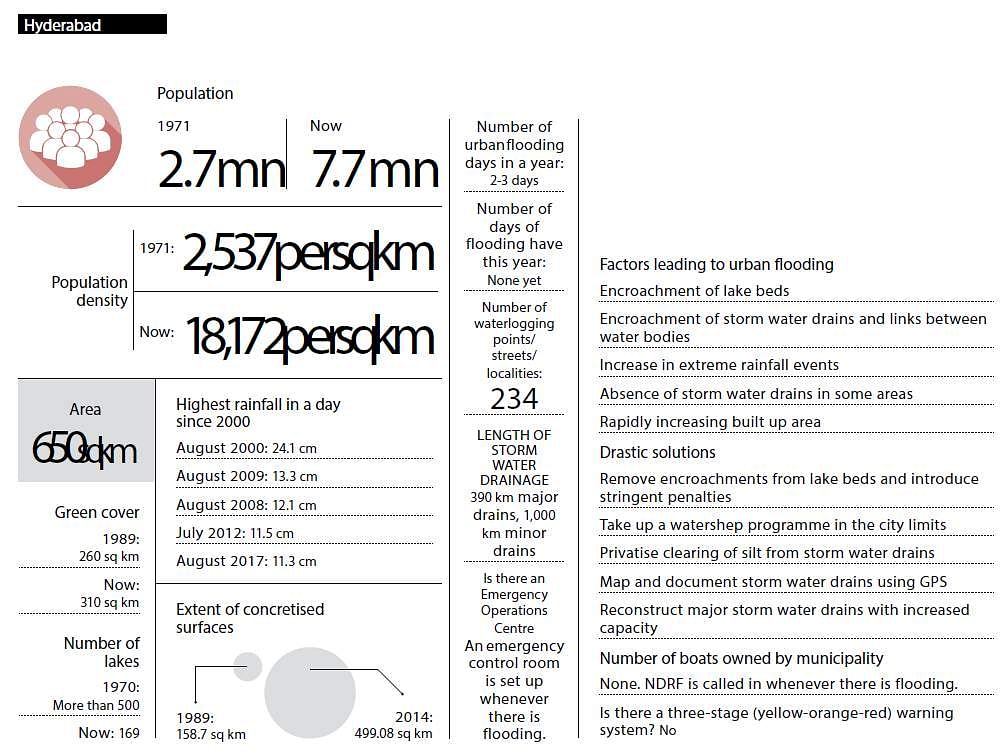 Now we are on Telegram too. Follow us for updates
TAGS
floods