No respite from period  shaming for young kids

Rehana (name changed) was just twelve years old, when she ended her life unable to bear the humiliation caused by her teacher in front of her class that had boys in high number.

COIMBATORE: Rehana (name changed) was just twelve years old, when she ended her life unable to bear the humiliation caused by her teacher in front of her class that had boys in high number. Her only mistake (as her suicide note says) was to seek the teacher’s help, after she had stained her uniform with menstrual fluid.  The teacher in turn offered her the duster cloth she was using to clean the class’s board and even lifted the girl’s salwar top with a cane to check the stain in front of the entire class. Later in the cabin of this private school’s principal, the girl was also allegedly mocked and scolded for not knowing how to handle herself while menstruating. 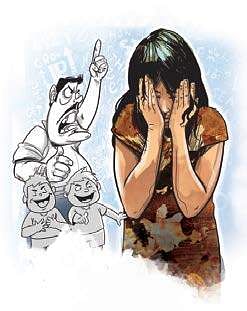 Despite the extensive debates on the period leaves and the omnipresent advertisement on sanitary pads, Rehana’s death has yet again made it clear period shaming is something young girls still face. And sadly, the people who needs to be educated includes even the school teachers, whom otherwise are assumed to be “mature”.

Experts say any effort for lessening the trauma the girl face and avoid them being shamed for something as natural as menstruation, must start with the school teachers, with whom the students spend much of their waking hours.

“It is the children from the economically backward section of the society who remain unprepared at their puberty age as, most of the times, the mothers’ are busy running between home and work place,” explained Dr NS Mony, consultant psychiatrist , Balaji Neuro Psychiatric Centre.

“In their busy schedule, educating the children about their body gets least priority and the children get to know about such things only from their peers,” he said, while adding that children belonging to the other sections are aware of puberty and the issues associated with it.

We talk so much about sex education but what is important is family life education where the child would be taught about various aspects of handling life situations, he said, emphasising that need of educating the parents and teachers, as well.

“Children are aware of the issues,” said the officials at the District Child Protection Office, citing it as a reason for not lecturing the children about puberty during their visits to the schools.
Agreeing with officials, N Vishalakshi, TNpresident of private school teachers association, said most private schools train teachers on handling children and creating stress free environment.

Huge funds, but free napkin scheme not a full success

Coimbatore: In 2011, to promote personal hygiene among the young rural children, the former chief minister J Jayalalithaa, launched a free sanitary napkin distribution scheme for students aged between 10 and 19 in villages. However, a writ petition filed in 2016 in the Madurai bench of Madras HC by the women advocates association of Madurai bench seeking the strict implementation of napkin vending machines scheme and constructing of either mansory choolas or incinerators for the safe disposal of napkins in schools. “A huge amount was being allotted for the facilities, but a major portion of continues to remain idle,” said N Krishnaveni, senior advocate.