Political career of Karunanidhi gained momentum after the agitation on July 15, 1953 at Kallakudi

DMK, then a fledgeling political party, organised the protest demanding change of the village’s name from Dalmiapuram back to its original name of Kallakudi. 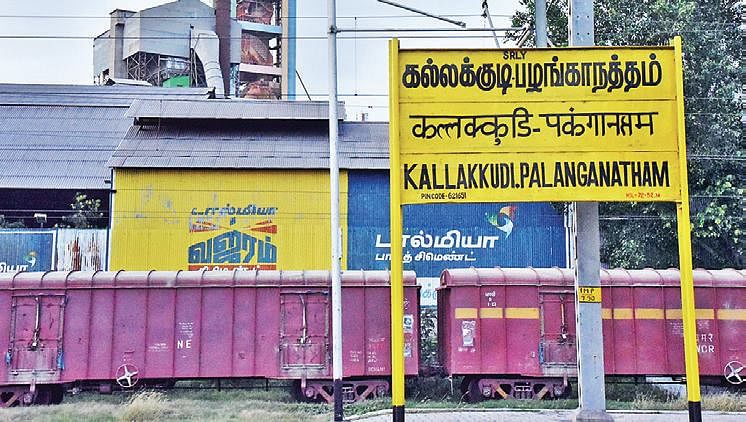 Protest at the railway station

CHENNAI: It is an obscure railway station at Kallakudi village, where the reservation booking counter was recently closed down for want of patronage. It was at this station, then called Dalmiapuram, where the political career of M Karunanidhi picked up momentum with an agitation on July 15, 1953, which not only gave the young budding politician the first taste of jail life, but also earned him the title ‘Kallakudikondan’, which was subsequently celebrated by Nagore Hanifa through the song, ‘Kallakudi Konda Karunanidhi Vazhgavey’.

‘I have forgotten my school enrolment number, but vividly remember the prisoner number 5779 given to me at Tiruchy Central Jail,’ Karunanidhi later said in his autobiography Nenjukku Neethi. Karunanidhi and other protesters were taken to Ariyalur court, where they were sentenced to six months in prison, as they had lain on the railway tracks at the station. Subsequent to the protest, DMK founder C N Annadurai said: “Whether I ask Karunanidhi to lie down on the railway track or take up a minister’s post, my younger brother would do both with equal elan and responsibility.”

DMK, then a fledgeling political party, organised the protest demanding change of the village’s name from Dalmiapuram back to its original name of Kallakudi. The place had been named Dalmiapuram as a Dalmia cement factory was functioning there. The stir was focused on the signboard at the railway station platform. The protest was a shot in the arm for the struggling DMK as it became a historic event.

Karunanidhi, assigned to lead the protest by Annadurai, had formed teams of cadre and proceeded towards the railway station. They climbed the railway platforms and pasted the name ‘Kallakudi’ over the ‘Dalmiapuram’ board there. “Even after sticking the name ‘Kallakudi’ on the board, the police did not take the protest seriously. Hence, I had to devise a plan on the spot and we  decided to lie down before the train that was waiting,” he wrote later on.

B Thangaraj (79) of Kallakudi was studying in school when the protest was organised. A witness to the protest, he recalled: “All the cadre assembled at the backyard of Thambusami’s house here and then marched towards the railway station. When Karunanidhi and others were lying on the track in front of a train, the police asked them to move away. The train’s engine was turned on to threaten the protestors. But they refused to withdraw. So the police had to arrest them. This created a huge commotion at the railway station as many people had gathered there. Police had to open fire to bring the situation under control. After hearing the gunfire, the public including me, ran away,” he narrated. One passenger and one party cadre were killed in the police firing.

After Karunanidhi was moved away from the spot, poet Kannadasan too led a team to block the train. All of them were arrested. Kannadasan was hospitalised with injuries sustained in the process.Recalling their experience inside the jail, Karunanidhi wrote, “When in jail, we ran a mock government by assigning portfolios to ourselves. Ministers were appointed to oversee proper distribution of food, maintenance of health and we appointed leaders to each block inside the jail.

These leaders had to bring to the attention of the cabinet any complaints in their blocks. There was also a water minister to ensure the availability of water for bathing and drinking and a home affairs minister to communicate with jail officers. I was the leader to all of them. We managed ourselves and fulfilled our needs. When we were released from jail, all of us were emotional and cried. Freedom separated us.”
After Karunanidhi was released from the jail, he was given grand welcome by the party cadre in several districts. Karunanidhi also attributed the prison reforms introduced during the DMK’s rule to his experiences in jail.

After DMK came to power in 1967, it persistently pressurised the Centre to pass an order to change the name of Dalmiapuram to Kallakudi and got the order to this effect in 1969. Subsequently, the name of the railway station was changed to ‘Kallakudi-Palanganatham’, by also including the neighbouring village’s name. The DMK conducted victory meetings across the State. In one such meeting at Kallakudi, Karunanidhi unveiled the new name board of Kallakudi, just a few years after the party came to power in Tamil Nadu.

Now we are on Telegram too. Follow us for updates
TAGS
Karunanidhi death DMK chief

The day I lose my passion for experimentation, I will be done with game: Ashwin