The premises of the majestic Ekambareshwarar temple are clean, but it ticks all the wrong boxes when it comes to fire safety

Unused wood, bundles of ropes, piles of logs, broken chariots, empty cans and broken electrical appliances are stacked haphazardly in an empty mandapam at the entrance of Ekambareshwarar temple in Kanchipuram. Electrical cables creep on the walls or hang loosely out of a broken switch board. The temple is perhaps the perfect stage for a dangerous fire accident.

In the wake of the recent fire at Madurai Meenakshi Amman temple, a visit to temples in Kanchipuram - the city of thousand temples- reveal that fire safety in temples is restricted to a handful of cylinders of fire extinguishers placed on a few odd pillars and corners of the floors.

The congested skyline of the town is interrupted often by magnificent temple towers that rise skyward. The temple-town is a complex grid of narrow streets and market roads which traps hundreds of temples. Around every temple, there are at least four market streets lined with shops selling the famous Kanchi silk sarees. The congestion on the streets is directly proportional to the popularity of the temple nearby.

The streets near Kanchi Kamakshi Amman temple are predictably crowded, with hundreds of saree shops, whose managers are enticing pilgrims. A year after the renovation was taken up for the Kumbabishekam, the temple management is keen on improving safety standards. However, there is little they can do to a temple built in the 14th century. Like Ekambareshwarar, Kamakshi Amman temple too houses stacks of unused wood in vulnerable areas.

“In case of a fire accident, the fire engine can only access the temple through the main entrance,” a senior temple authority told Express. Admitting that the only fire-fighting equipment at the temple are a few extinguishers fixed near the sanctum sanctorum and temple office, the authority said that it was not enough for the temple’s safety. 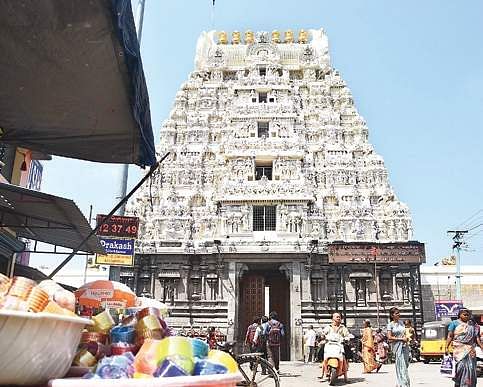 He however argued that there was very little scope for fire accidents, as lamps were lit in an isolated space and temple authorities had managed to tuck its electrical cables underground, ahead of the Kumbabishakam last year.

In contrast to the spacious and well-maintained temple premises, the access roads are clogged by visitors, their vehicles and street vendors selling flowers, lamps and other holy offerings. A simple fire in any one of these shops could spread like wildfire. Congestion in the market roads around temples is a common problem in Kanchipuram and they could become hot-spots for accidents during temple festivals.

Temple festivals are a grand affair in the city and residents in the locale are as indulgant in the “thiruvizha” as officials. Fireworks displays, held on grounds or in streets nearby,  are compulsory components and burnt boxes of  ‘delights’, ‘saram’ and ‘rockets’ are a common sight in empty floors of both temples.

While there are no figures on fire accidents, locals in every market street recall a different fire accident that was fortunately minor. Between wood, broken electrical appliances, shops and narrow streets, there lies the probability of a fire accident. Preventive fire fighting equipment to combat a disaster is however scanty.

Built in: Known to exist since 600AD
Height:  59m (194ft)
It is one of the Panchabootha temples. It stands for Prithvi or earth.
Area: 25 acres
It houses four gopurams. The tallest is the southern tower, with 11 stories at 180 ft, making it one of the tallest temple towers in India

Built in: Year of inception not certain; re-stablished by Adi Shankaracharya in 8th century
Area: 5 acres
Avge footfall:
5,000-6,000/day
During festivals: 13,000
There are four entrances but only one wide enough to allow fire engine

More from Tamil Nadu.
Now we are on Telegram too. Follow us for updates
TAGS
Kanchipuram Ekambareshwarar temple