Numbers don’t lie, but schemes do

COIMBATORE: How insightful can inferences drawn from stone cold statistics be? When five woodcutters from Tamil Nadu drowned in a waterbody at Vontimitta in Kadapa district in Andhra Pradesh recently, the body count only added to the mounting toll of gullible tribals falling prey to the red sanders mafia. However, hidden beneath the veneer of cold numbers is a long story of neglect and pursuit of two square meals, which are seldom addressed or brought to fore.

If numbers could tell the tale, data procured from the AP Forest Department would paint a grim picture. Since January 2015, various AP enforcement wings have arrested a whopping 10,664 Tamil Nadu people for allegedly felling redwood trees. Between January 2015 and December 2017, 10,558 Tamil Nadu residents were arrested by AP police, forest department and Red Sanders Anti-Smuggling Task Force (RSASTF). This year, the AP enforcement officials have nabbed 106 from Tamil Nadu, of which nearly 80 were nabbed in January. In an indictment of how earnest officials here are about tackling the issue, neither the police nor the tribal welfare departments have any data on Tamil people arrested by the AP police.

While the numbers indicate a surge in cross-border tree poaching and equally efficient preventive measures, what is missing is the reason that make the tribals and those in the hinterland to travel to AP. The migration and increasing affinity to poaching are indicative of the State government’s failure to address the fundamental needs of the tribal populace. More often than not, it’s this segment of the society that finds itself in the vice-like grip of touts, scouting the hilly regions of Tiruvannamalai, Salem and Vellore for tree fellers. These three districts contribute to around 20 per cent of the people arrested in Andhra. 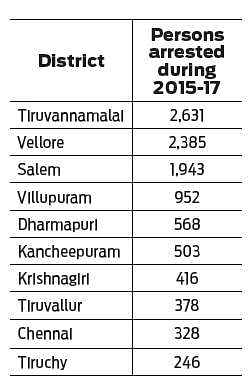 In the immediate aftermath of the AP Red Sanders Anti Smuggling Task Force gunning down 20 Tamil Nadu people in Seshachalam forest for felling red sanders, Tamil Nadu police too visited the scene of crime to conduct a detailed inquiry. A top official, who was part of the probe team, found that almost all the people deployed for cutting redwood trees came from Scheduled Tribe (ST) communities. The reason was lack of job opportunities. The jobless and gullible tribals were lured by touts to seek out their fortune on the borders with Andhra Pradesh. The pay was good and face-off with Andhra police only an occupational hazard, which was offset by the promised gains.

Why seek out woodcutters from Tamil Nadu? The fear of repercussion keeps Andhra woodcutters away from the forests. This is where touts come into picture. They scout the hilly terrains to seek out the poverty-riddled gullible tribals and bundle them to the forests for a paltry pay of Rs 500-Rs1,000 a day. For those reeling under starvation, the money is godsend. Moreover, the tribals get paid, irrespective of whether they chop trees or not. Their meter starts rolling the moment they step out of their villages, the official said.

Seshachalam encounter happened nearly three years ago. Many proposals and schemes were mulled, primarily to plug the migration, which included creating employment opportunities in villages and giving free education to their children, the official said. However, tribals still go to Andhra Pradesh forest to eke out a living as proposals are not enough for survival.

What troubles Kadapa Human Rights Forum convener K Jayasree is why Tamil political parties maintain a studied silence? “If Sri Lankan officials arrest a Tamil, a huge furore follows in Tamil Nadu. However, political parties remain tight-lipped when Andhra police nab Tamil people. Most of the people arrested belong to the unorganised Scheduled Caste. This suggests that political parties and Tamil Nadu police are not concerned about their fate. No one raises their voice in support of the arrested tribals,” she says.
While the Seshachalam killings hit headlines for a week, little was reported about those arrested on the fateful day. Andhra police deliberately booked them on charges of smuggling redwood and attempt to murder to detain for a longer term, Jayasree said, adding tha the solution lay in creating job opportunities and education.

State Tribal Welfare Director T Rittu Cyriac admits that ST community people are increasingly falling prey to redwood mafia. He assures that the Tribal Welfare Department has been proactive in receiving suggestions from stakeholders to devise a special scheme for tribals. “Earlier, we took steps to give employment opportunities by providing milch animals and training them in beekeeping. However, these are investment intensive, no matter how small the schemes are.They cannot afford them,” Rittu says.

More from Tamil Nadu.
Now we are on Telegram too. Follow us for updates
TAGS
Kadapa district Red Sanders Anti Smuggling Task Force