Union Petroleum Minister Dharmendra Pradhan is seeking an additional 600 acres from the State government to set up the `27,460-crore Cauvery basin refinery at Narimanam in Nagapattinam district.

CHENNAI: Union Petroleum Minister Dharmendra Pradhan is seeking an additional 600 acres from the State government to set up the Rs 27,460-crore Cauvery basin refinery at Narimanam in Nagapattinam district. 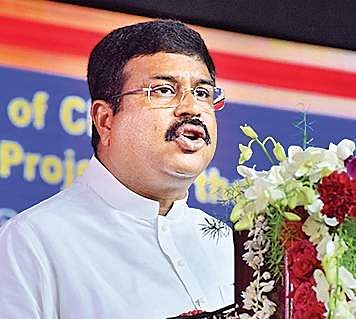 Speaking after dedicating the Chennai Petroleum Corporation Limited’s Residue Upgradation Project to the nation on Tuesday, the minister said that the project would be taken up once additional land was acquired.

K Pandiarajan, Minister for Tamil Development, Culture and Archaeology, who was also present, Cauvery basinsaid that the Union Petroleum Minister would be holding talks with Chief Minister Edappadi K Palaniswami to acquire the additional land. “They already have 600 acres and want an additional 600 acres for setting up a new 9 million tonnes-per-annum refinery in the Cauvery basin. Currently, it has an one million tonnes-per-annum refinery in Nagapattinam,” he said.

He also said that the State government has been urging the Centre to set up naptha cracker unit in Tamil Nadu. He said once it is established, it would reduce the import of petroleum products worth `2.17 lakh crore.

Earlier, Pradhan said that the Residue Upgradation Project would reduce production of fuel oil and increase percentage of high sulphur crude oil processing in the crude mix. The main products from this project are 70 pc of gas and liquid distillates with around 30 pc of petroleum coke.

Earlier, Pandiarajan urged the Union Minister to use the Corporate Social Responsibility funds for rejuvenating waterbodies in Tiruvallur district and help build school infrastructure as well as skill development centre for people in the region.

More from Tamil Nadu.
Now we are on Telegram too. Follow us for updates
TAGS
Union Petroleum Minister Dharmendra Pradhan Narimanam Nagapattinam