Minister says over 70 per cent seats may go to State Board, 30 per cent to other boards.

CHENNAI: The number of government quota MBBS seats has increased from 3,328 to 3,501 after the Medical Council of India gave approval for two private medical colleges. The seats have been added to the existing seats in the ongoing counselling for MBBS and BDS admission 2018-2019.

The minister said, “Over 70 per cent of seats might go to State Board students and 30 per cent to CBSE and other boards.

About the Christian Medical College (CMC), Vellore, the minister said the State would act as per court directions. “The CMC is yet to surrender seats as the case is pending in the court.”

Health secretary J Radhakrishnan said, “90 ‘native’ students were added to the rank list and, among them, 28 or so will be eligible for medical seat”.

The selection committee officials said these students had studied in other states and also written NEET-UG representing other states, but their parents are natives of Tamil Nadu. “One student with similar case went to the court praying to consider him as the state student. The court ruled in his favour. Later we found that there are over 80 similar students and included them in the rank list. However, not all students will get medical seats,” said a senior selection committee official. 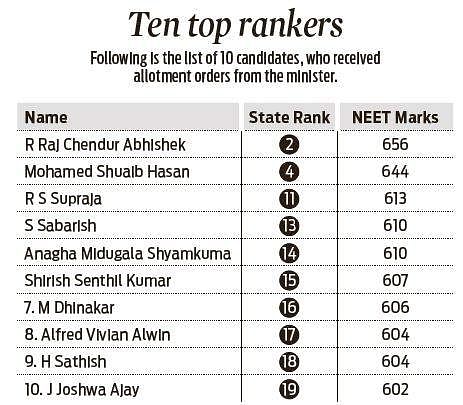 Now we are on Telegram too. Follow us for updates
TAGS
MBBS seats government quota Medical Council of India