They died while trying to reach ashore after the vessel was grounded due to Cyclone Nilam in October 2012; 16 survived

CHENNAI: The families of six sailors of Pratibha Cauvery who died while trying to reach ashore after their vessel was grounded due to Cyclone Nilam on October 31, 2012, and the 16 survivors are yet to get compensation from the owners, according to International Transport workers Federation inspector K Sreekumar.

Sreekumar, who has been following the case closely since he was also involved in helping the stranded crew, told Express that parents of one of the crew members K Niranjan committed suicide at their home at Puliyangulam in Arakkonam of Vellore district over the delay in getting compensation.

In a suicide note addressed to “judges”, Kothandapani, father of Niranjan, had stated there is no justice for his family. No arrests had been made. “Nobody is there to save us. No money for treatment and no proper food, we became like beggars. So, we decided to end our life.”

Kothandapani also made a fervent appeal. “At least, save the other five children’s parents.” However, nearly five years have passed since the suicide happened but the families are yet to get the compensation. 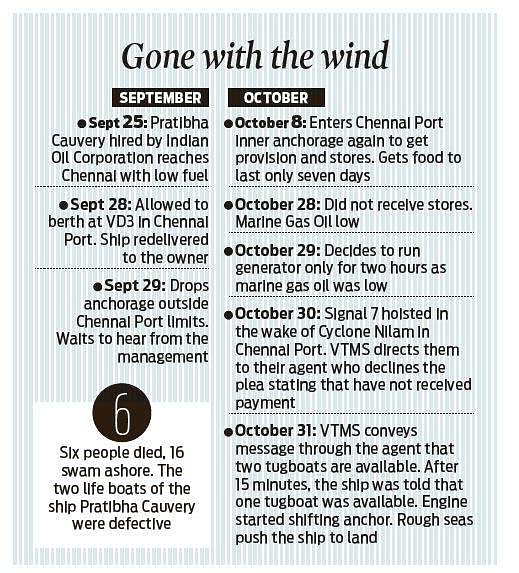 Now we are on Telegram too. Follow us for updates
TAGS
Pratibha Cauvery Cyclone Nilam compensation