According to CBSE, the number of students who ‘registered’ to write NEET in Tamil, this year, was 24,072.

MADURAI: After the Madurai Bench of the Madras High Court directed the Central Board of Secondary Education (CBSE) to award 196 grace marks to the 24,000-odd students who wrote the examination in Tamil this year, educationists in the State raised their voice saying that only the students who were schooled in Tamil medium should be given the grace marks and not those who studied in the English medium but opted for a Tamil question paper.

Earlier on Tuesday,  a division bench comprising Justices CT Selvam and AM Basheer Ahamed, hearing the PIL filed by CPI (M) MP TK Rangarajan, ordered CBSE to grant 196 grace marks to the students who took the NEET in Tamil this year, citing translation errors in 49 of the 180 questions in the Tamil question papers. It also directed CBSE to publish a fresh list of qualified candidates within two weeks and stayed all the current proceedings for admission to the undergraduate medical courses, which are underway based on the present candidate list.

Commenting on the directive, Jayaprakash Gandhi, an educationist, said the whopping 196 marks granted as grace marks should be given only to those who studied in Tamil medium since they were the ones really impacted.

Highlighting the ambiguity in data, educationist Prince Gajendra Babu said the focus of the issue was on the Tamil medium students who were given negative marks for the questions were wrongly translated in Tamil and had to solely rely on Tamil questions only.

Welcoming the order, D Nedunchezhian, an educationist, urged the state to come out with the comprehensive list of students who had written the examination in Tamil and those who had studied in Tamil medium. “We have been talking only in terms of approximation. Neither the CBSE nor the State has so far made available the precise number of Tamil medium students who appeared for NEET.”

BENEFIT TO THE DESERVING

The real number of Tamil medium students who suffered because of CBSE’s translation blunder and who should reap the benefits of the court’s direction might come to around a thousand, experts assume

Win some, lose some

While the number of medical seats under the Other Caste category will largely remain unchanged, the High Court direction is likely to cause major fluctuations only in the MBC and SC/ST categories 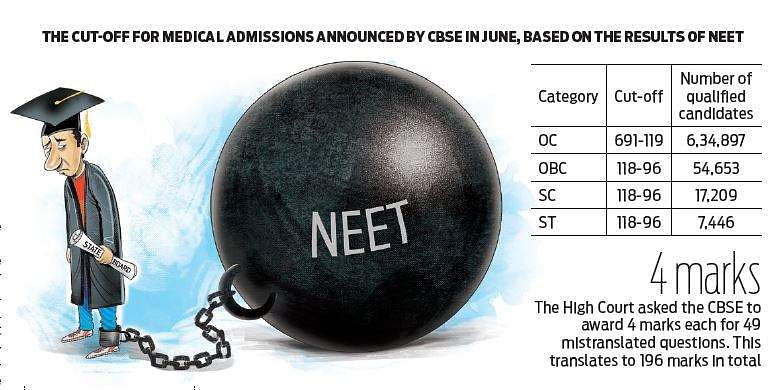 Now we are on Telegram too. Follow us for updates
TAGS
Madurai Bench Madras High Court