Over 50 per cent of students who got admissions in government medical colleges in Tamil Nadu for MBBS this year is those who had completed class XII in 2017 or earlier.

MADURAI: Over 50 per cent of students who got admissions in government medical colleges in Tamil Nadu for MBBS this year are those who had completed class XII in 2017 or earlier. Sources said that a whopping 67 per cent of students admitted for medical courses (including BDS and government seats in self-financing colleges) this year are those who had appeared for NEET for the second time and those with at least one-year lag in admission. 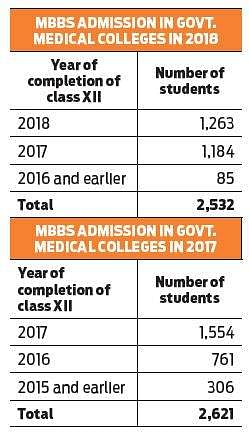 According to data accessed from the Directorate of Medical Education by Express, a total of 2,532 students were admitted for MBBS in government medical colleges in the State this year. Of them, 1,296 students are those who secured MBBS seats after a lag of at least one year, after completion of class XII in the preceding academic years.

This accounts for 50.1per cent of the total students who secured MBBS admission in government medical colleges this year. A closer look also indicates that of the 50.1 per cent, students who wrote NEET twice (who completed class XII in 2017) constitute 46.8%.

The data also show a 10 per cent rise in the number of students who secured delayed admission this year. Meanwhile, the percentage of students who were admitted in government medical colleges for MBBS after one year lag increased by 17.8 per cent this year. This also means that the chance of students securing medical admission in the same year of completion of school has been witnessing a diminishing trend, leading to the prolonged wait of becoming a doctor.

Sources said that a whopping 67 per cent of the students admitted for medical courses (including BDS and government seats in self-financing colleges) so far this year had gained delayed admission. The percentage is expected to rise by the time the counselling for management quota in private medical colleges and for the All-India seats to be surrendered by the Centre to the State.

Academician Jayaprakash A Gandhi opined that the increase in students facing a lag in medical admission was occurring after the introduction of NEET.“Earlier, students who fared better in class XII were able to gain medical admission based on the marks. They also had the advantage of going for revaluation,” he pointed out.

The percentage of students admitted to medical courses with a lag will see an upward trend in the coming years, bringing down the chances of students being admitted the same year they finish school, said educationist Prince Gajendra Babu.

Gandhi added that the percentage of students securing delayed admission after attempting NEET more than once will soon touch 80%, thereby adding a minimum of one year to the number of years of medical education that qualifies one to become a doctor.