Anxiety in morning, hope in evening for ‘Thalaivar’ M.Karunanidhi

CHENNAI: In a desperate attempt to stay awake, people in and around the hospital started singing on one side, while in another, a person was seen sharing stories. Close to the pavement of the hospital, there was a solitary man narrating stories.

There was pin-drop-silence as this die-hard fan of ‘Thalaivar’ from Tiruvarur boasted of Karunanidhi’s wit and political acumen. Dressed in a threadbare lungi and checked shirt with a DMK ‘thundu’ on his left shoulder, this storyteller described every encounter with Karunanidhi in detail.

“I saw him here in 1975… He wore a different type of sunglasses then…” the man’s voice melted in the street-lamp-lit road. “We have always known him as an old man. It is nice to hear stories about his younger days,” said a 22-year-old, who camped outside the hospital with his friends.

In another part, people also broke into song every now and then to ward off sleep. While there was anticipation and anxiety in the afternoon, the late evening bulletin from the hospital saying Karunanidhi responding to treatment has given hope to the crowd. They are a little relaxed as they await for dawn.

Earlier in Salem, Chief Minister Edappadi K Palaniswami told reporters that the Tamil Nadu government was ready to provide all possible medical assistance to Karunanidhi, who was a five-time CM, if it was approached.

Speaking to reporters, Gurumurthy said though he had ideological differences with Karunanidhi, he had immense respect for him. Karunanidhi is a leader not restricted to Tamil Nadu, but to the entire nation.
Meanwhile, tweets from celebrities were doing the rounds as Hashtag #KarunanidhiHealth is trending on Twitter. Delhi Chief Minister Arvind Kejriwal tweeted, “My prayers for Sh Karunanidhi’s fast recovery.”

Will provide all help: CM
CM Edappadi K Palaniswami said that the government was ready to provide all possible medical assistance to Karunanidhi, who was a five-time CM, if it was approached 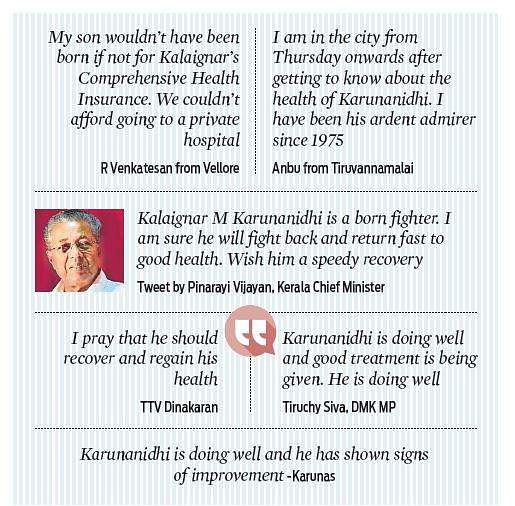 Now we are on Telegram too. Follow us for updates
TAGS
Karunanidhi Kauvery hospital Kalaignar