The much-awaited verdict on the 18 MLA's disqualification case came was a split between the two judges, thus leaving the MLAs' fate hanging. 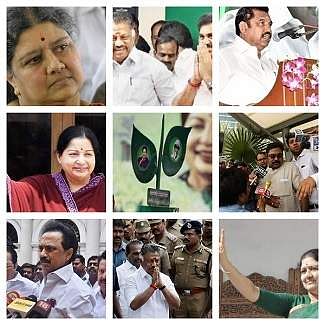 The split verdict of the Madras High Court Bench on the disqualification of 18 AIADMK MLAs, pronounced Thursday, has come as a breather for the government headed by Chief Minister Edappadi K Palaniswami as a floor test cannot be conducted until a third judge hears the case and delivers a verdict. The verdict will have huge political implications.

During the past year, the political scenario in Tamil Nadu has been ever-changing.

Here's a timeline of events that happened in the past year explaining the political turmoil that erupted after J Jayalalithaa's death:

Feb. 5, 2017: With the growing popularity in the party, Sasikala was unanimously elected as the AIADMK head, thus taking the place of Amma.

Feb. 14, 2017: But the AIADMK once again lost their leader after the Supreme Court set aside the Karnataka High Court Order, and convicted Sasikala in disproportionate assets case. Edappadi Palaniswami was elected as the next AIADMK party president. Twenty rebel MLA's including the sitting CM O. Panneerselvam was expelled from the party.

Feb. 18, 2017: Palaniswami government passes the litmus test by proving majority in the state assembly after the eviction of DMK MLAs. Stalin was manhandled and brought out of the house by Marshalls.

Mar. 22, 2017: The Election Commission freezes AIADMK's traditional 'two-leaves' symbol for the R K Nagar by-election in Chennai, thereby recognising the split in the party. The seat was vacant since the demise of Jayalalithaa.

April 10, 2017: R K Nagar by-elections to be held on April 12 were cancelled by the Election Commission after the tapes of 'cash for vote' surfaced in the media. The videos show cash being distributed for votes. The Income Tax officials alleged that Sasikala fraction of the AIADMK paid money to the voters.

April 18, 2017: Palaniswami-lead AIADMK revolts against the jailed party General Secretary Sasikala and decides to keep the Mannargudi family away from the party affairs.

Aug. 21, 2017: The O Panneerselvam and Palaniswami fractions of AIADMK merged and the former became the Tamil Nadu, Deputy CM.

Aug. 22, 2017: Sasikala's nephew TTV Dhinakarn threatens to pull down the government with the support of 18 AIADMK MLAs.

Sept. 18, 2017: Tamil Nadu Speaker expels 19 MLAs owing allegiance to Dhinakara after the Chief whip S Rajendran petitioning him. Later on, one of the MLA's Mr Jakkaiyyan was let off after he personally met the speaker.

Dec. 24, 2017: Dhinakarn wins the RK Nagar by-elections as an independent MLA with 'pressure cooker' as the symbol.

June 14, 2018: The two-judge Madras High Court bench gives a split verdict. The case is now referred to a three-judge bench.

PM Modi not a sympathiser of farmers but seeker of votes: Priyanka

Omicron variant patients in Delhi to be isolated, treated at Lok Nayak Hospital