Chennai-Salem Greenfield Corridor: Farmers want compensation as per market rates rather than by guideline value

Farmers, whose land will be acquired to implement the `10,000-cr Chennai-Salem Greenfield Corridor, are opposing the project fearing a lose of livelihood, threat to the ecosystem and measly compensati 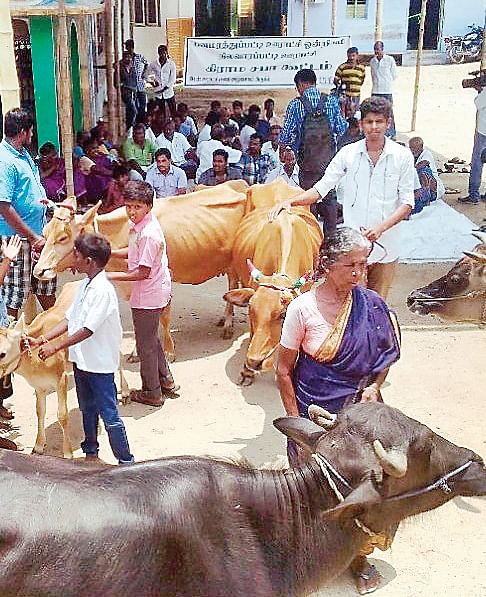 SALEM: Farmers, whose land will be acquired to implement the Rs 10,000-cr Chennai-Salem Greenfield Corridor, are opposing the project fearing a lose of livelihood, threat to the ecosystem and measly compensation offered by the government which a section of them claim is well below the market rate. Farmers charge that land which to be acquired for the project is fertile land with good access to ground water, especially the stretch from Ayothiyapattinam to Tiruvannamalai district, called the “Mango belt”.

Farmers in Dharmapuri, Salem and Tiruvannamalai started protesting the project from May when the terms for land acquisition with details of survey numbers of land to be acquired were notified under the Land Acquisition Act of 2013.

“Government officials claim that they will provide Rs 8 lakh for one acre of land as compensation which is Rs 18 per square ft. But actual market rate for one acre around Salem starts from Rs 25 lakh to Rs 3 crore,” said All India Kishan Mahasabha (AIKM) state committee member A Chandra Mohan.

“In the belt where coconut trees are found in huge numbers, the average lifespan of a coconut tree is 60 years and so, a farmer may earn up Rs 10 lakh from a tree. However, the Government has fixed a rate of Rs 40,000 per tree,” he stated. Similarly, in this belt there are many tamarind trees, grown mostly only in South India, most of which stand to come under the axe for the project.

In Tamil Nadu 65 per cent of farmers are micro, small and marginal farmers. The land to be acquired by the government for this project is mostly owned by small and marginal farmers. As most of this land is ancestral, the farmers are emotionally connected to their property, Chandra Mohan added.
“The problem is that government officials are fixing compensation as per guideline values instead of market values. We know last year, the State Government reduced the guideline value by 33 per cent,” he added.

Outreach on part of government officials to farmers has also been poor in Salem. Farmers are only told that the project will definitely come and that officials will recommend an increase in compensation. Meanwhile, farmers say they are being intimidated by local authorities as police personnel, including from intelligence sections, are reportedly attending their meetings with revenue officials. So far, at least two farmer-activists have been arrested by Salem police for ‘instigating protests’ and many more are being tracked by police. This has created fear among farmers who claim that police stopped them from filing their objections in writing. It is reportedly because of this that on June 14, the last day, for filing objection for the project very few farmers participated.

Speaking to Express on conditions of anonymity, a farmer belongs to Achankuttaipatty said that police was threatening farmers by conducting early morning raids on houses of those speaking against the project.

“If Government pays the market price as compensation 95 per cent of farmers will be ready to give their land. Without paying market value for the land, the project cannot be implemented,” the farmer said.
Meanwhile in Kancheepuram, R Sriraman owns a two acres of paddy fields in Manalimedu. Although only a part of his land is to be acquired, he stands to lose his well. “It is a 50-foot-deep well; without it, I don’t know how to irrigate the rest of the field,” he said.

While the Government has set the compensatory price at Rs 20 lakh a hectare, the market price is over Rs 1 crore per acre, according to K Nehru, a farmer in Uthiramerur, adding that there had been no public consultation in this regard. The farmers planned to petition the Collector soon, he said.
In Tiruvannamalai too, the project has drawn flak from farmers, environmental activists, advocates and locals.

(Inputs from Nirupama Vishwanathan in Chennai & Shyamsundar N in Tiruvannamalai)