There are no legal restrictions on the release of Rajiv assassination case convicts, say legal experts. 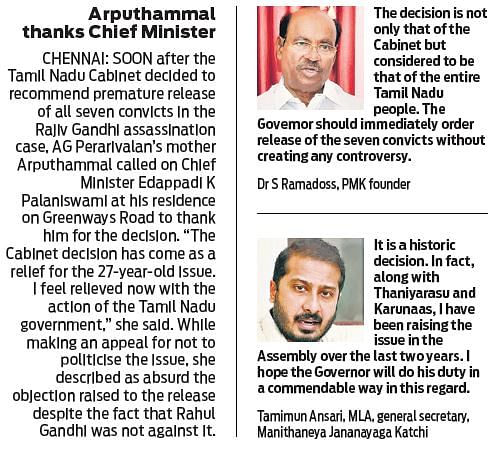 CHENNAI: There are no legal restrictions on the release of Rajiv assassination case convicts, say legal experts. Speaking to Express, senior advocate K M Vijayan opined that there was no legal embargo on the release of the seven life convicts in the Rajiv Gandhi assassination case and however, depending on the Governor’s decision, further issues needed to looked into.

“Constitution Benches of the Supreme Court in two different cases ruled that under Article 161, whenever a pardon petitions comes, the Governor can act as per the advice of the council of ministers. The Governor does not even have any powers to refer the matter to the Union government or the President,” he said

However, Vijayan noted that the effect of pending case on the concurrent power of Central government in case of death sentences under CrPC 434 has not been settled by the Supreme Court. “The apex court in its shorter judgment directed the Governor to dispose of the petition (of Rajiv case life convict A G Perarivalan) because it is pending since 2015. Hence, there is legal embargo on the Governor to release the seven convicts,” he pointed out.

Echoing the similar views, retired Madras High Court Justice D Hariparanthaman said the Governor can either sit on the recommendation of the Tamil Nadu Government or can ask the government to reconsider.
“If the state government again recommends to release the seven convicts, he has no other option but to accept the decision. As per provisions of the Constitution, the Governor cannot seek any legal opinion with either with Attorney General or the President,” added Hariparanthaman

Quoting Ambedkar’s comments on the powers of the Governor during the discussions in Constituent assembly, the retired judge said the Governor and President’s posts are constitutional ornamental posts without powers.

Now we are on Telegram too. Follow us for updates
TAGS
Rajiv Gandhi Rajiv Gandhi assassination convicts Tamil Nadu