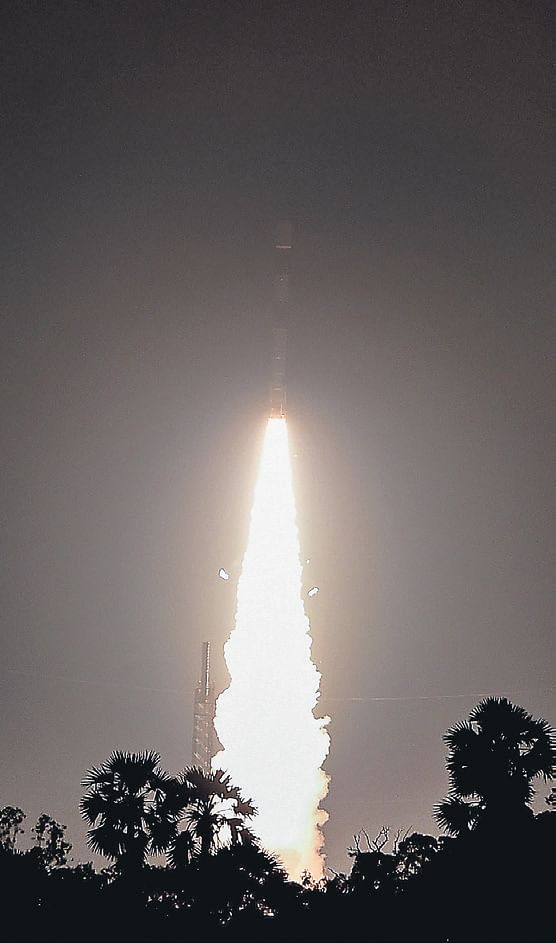 In its 44th flight, India’s workhorse PSLV took-off in a textbook style at 10.08 pm from First Launch Pad of Satish Dhawan Space Centre at Sriharikota, about 100 km from Chennai. It was the lightest version of PSLV flying in Core Alone configuration in which the rocket will be without six solid strap-on motors.
Compared to some of the other previous missions, Sunday’s launch was a cake walk for the national space agency and since this being a dedicated commercial launch, no manoeuvres were attempted.

The rocket has performed exceedingly well with zero deviation. Just over three minutes into the flight, heat shield separation took place and under 18 minutes PSLV-C42 achieved the desired altitude of 588 km travelling at a speed of 7,566.69 metres per second and the two satellites - NovaSAR and S1-4 - got separated and placed in a Sun Synchronous Orbit (SSO).

Inside the VIP box were officials from Surrey Satellite Technology Limited (SSTL) of United Kingdom who eagerly followed the flight profile alongside ISRO officials, including former Chairman AS Kiran Kumar.

Soon after the successful launch, a visibly delighted ISRO Chairman K Sivan congratulated his team and said the number of launches will significantly improve in the coming months. In the next six months, the space agency is planning to achieve 18 missions. “There will be a launch  every two weeks in the remaining months of this year,” Sivan said.

He also hinted at more dedicated commercial launches as industry is being roped in to build PSLV rockets. “In the next one year, we are hopeful of launching an industry-built PSLV rocket.”
S Somanath, Director, Vikram Sarabhai Space Centre (VSSC), said the next launch PSLV C-43 will be carrying one Indian satellite and 31 customer satellites.

Meanwhile, breaking away from the tradition, Sivan asked a foreign national to address after the launch. Sir Martin Nicholas Sweeting, founder and executive chairman of SSTL, said: “This launch shows the confidence and strong bond between India and UK space agencies. We are happy with the performance of PSLV and the precise injection of our satellites,” he said.

Now we are on Telegram too. Follow us for updates
TAGS
ISRO PSLV-C42

Uttar Pradesh gears up for bypolls in Mainpuri, Khatauli, Rampur: All you need to know