Dravidar Kazhagam local functionary K Shanmugam removed the slippers and found that the statue was also damaged with stones. 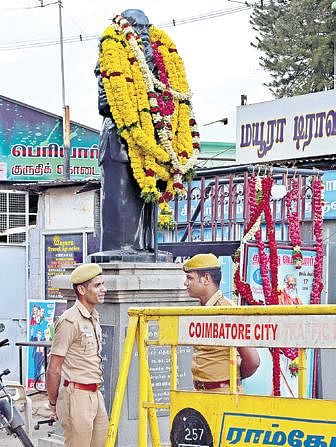 COIMBATORE : While people across the State were observing the 140th birth anniversary of social reformer and Dravida Kazhagam founder Periyar E V Ramasamy, a statue of the late leader in Dharapuram was found with two slippers placed on the head on Sunday night. Dravida Kazhagam members and supporters were greeted with this sight at 6 am on Monday, when they went to garland the statue outside a park on Udumalaipettai-Dharapuram road.

Dravidar Kazhagam local functionary K Shanmugam removed the slippers and found that the statue was also damaged with stones. “For the birth anniversary, we had painted and cleaned the statue till 11 pm on Sunday and came back early on Monday morning. Between this time, some culprits damaged the head of the statue and glasses,” he explained.

Based on his complaint, Dharapuram police registered a Community Service Register (CSR) and were probing into the matter. They were collecting CCTV footage available from the locality. Meanwhile, after a man (allegedly a BJP member) hurled shoes at a Periyar statue in Chennai, police in Coimbatore and Tirupur tightened the security around the statues of the leader in the two districts.

Now we are on Telegram too. Follow us for updates
TAGS
Periyar DMK