Dalit siblings who received State award say their teachers used every chance to make them feel they weren’t eligible.

VILLUPURAM: Caste bias is not new to Tamil Nadu. And, educational institutions are often where young children learn and start practising discrimination. But, the story of Selvarani and Keerthana shows how systematic the problem of casteism is, and how teachers, who are expected to liberate young minds, are, in cases such as these, the very perpetrators.

Twenty-year-old GS Selvarani found the courage to talk about the discrimination she faced in school, a private institution, long after she passed out. Her sister Keerthana still studies in Class-XII. Born into a Dalit family, both of them are high achievers. A few years ago, the State government honoured them with Kalai Ilamani award, in the field of arts and culture. 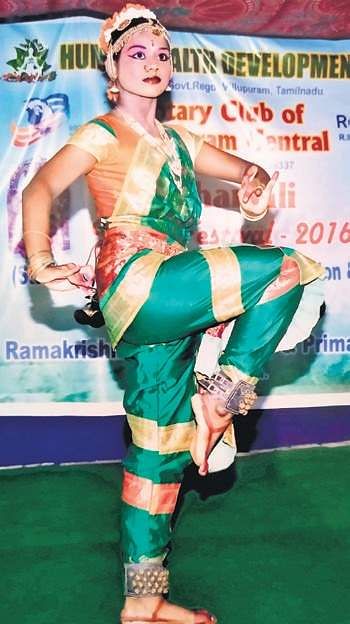 The siblings have won numerous awards till date, in Bharatanatyam, painting, Yoga and Silambam. On several occasions, they were allegedly not allowed by their teachers to go up on the stage and receive the prize from chief guest. “In 2017, I was pulled back from posing with the District Collector for a picture, when I received an award from him,” says Selvarani.

“I was demeaned constantly for my caste and skin colour,” says Keerthana. “I was questioned how a Dalit girl could win Bharatanatyam and other arts competitions. My friends and teachers believed that only people born into upper caste families could excel in those art forms.” Selvarani won the Kalai Ilamani award for painting in 2014-15, and Keerthana for Bharatanatyam in 2008-09.

In May 2019, the siblings created a local record by performing Silambam for three hours at a stretch. Keerthana won the zonal championship in Silambam in 2015. They were trained by a private coach, from the government music college in Villupuram. “We had been training under him for 6-7 years. As soon as I won the zonal championship, he was hired by our school to train all children. We were happy. But then we realised that the school management had convinced the coach to stop giving us separate classes,” alleges Keerthana.

“In the following year, I was not allowed to participate in a Silambam competition because I was from a Dalit family. I was outright denied a chance. Later, my mother met the district sports officer and lodged a complaint, and I was given special approval to join the event.” The event was held at the Nehru Stadium in Chennai, and Keerthana won the third prize.

The girls’ parents, G Selvaraj and S Anandavalli, wanted their children to break the shackles of the caste system by excelling in some art form or the other. They had no clue that the girls would master more than one. “Caste has always prevented Dalit children from pursuing these arts. But we cannot stop fighting against it. Our children will continue to fight,” says Anandavalli.

“We are happy with our success, but would have been happier had we not been questioned and mocked by our teachers and friends. We are tired of hearing, ‘how can these girls from SC community win’ and told our success was because of government concessions.” Selvarani is currently studying final year political science. She aspires to become an IAS officer. Once Selvarani passed out, Keerthana too switched schools. She could not imagine staying in that environment without her sister.