With groundwater levels hitting rock bottom and monsoon failing almost every alternative year, city’s water woes could only worsen. To tide over the impending crisis,  the Chennai Metropolitan Water Supply and Sewerage Board (CMWSSB) has come up with a proposal that assures regular supply of 260 MLD (million litres per day). The plan is to recycle sewage into potable drinking water by setting up tertiary treatment plants, costing over `1,000 crore!

The treated water will be released into identified water bodies for recharge and pumped back into city’s  water distribution network. A total of seven lakes and water bodies, namely Perungudi lake, Narayanapuram lake, Kovilambakkam lake, Kilkattalai lake, Porur lake, Ayanambakkam lake and Rettai lake, will benefit from the project. 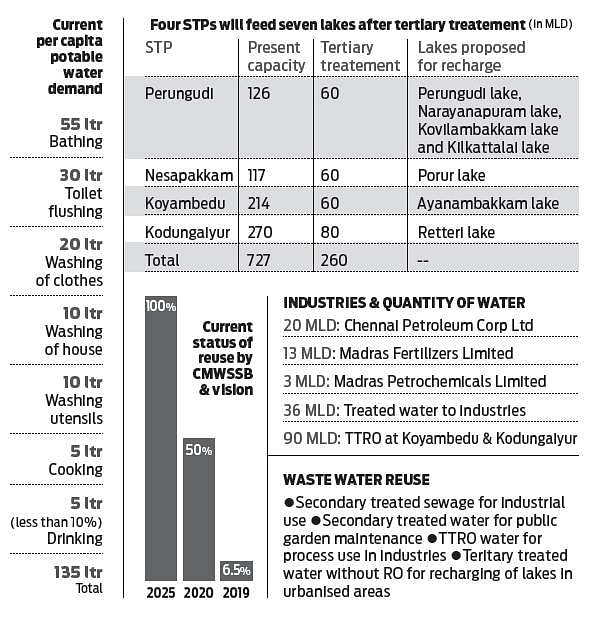 Senior officials told Express that for Chennai to have a sustainable drinking water supply, ‘recycling and reuse’ is the only way forward. “Tamil Nadu has been a pioneer in secondary treatment of waste water. We had set-up country’s first-of-its-kind effluent treatment plant in Kodungaiyur and supplied water to industries way back in 1991.

Currently, raw sewage is sent to  Sewage Treatment Plant (STP) for primary and secondary treatment, which at best can be used for industrial purposes. On most occasions, the treated water is released into Buckingham Canal, Adyar and Cooum rivers with Total Dissolved Salts (TDS) ranging from 800-1,000 mg per litre and faecal coliform measuring 5,500 MPN per 100 ml. Besides, there are two tertiary treatment reverse osmosis (TTRO) plants at Kodungaiyur and Koyambedu having a combined capacity of 90 MLD. Again, the water from TTRO is meant for industrial use.

“We made a conscious attempt not to use reverse osmosis membrane in new plants, which totally kills all the useful minerals in the water. Also, 4 kilo watts of power is consumed to produce 1,000 litres of water using RO technology while new plants will  only use 0.6 kw,” an official said.

For instance, Nesapakkam STP to Porur lake 10 MLD project is being designed and engineered without chemical additions and smart nitrogen removal control system following tertiary treatment plant, which consists of ozonation, sand filter, ultra filtration, activated carbon filter and ultraviolet at Nasapakkam.
IIT-Madras has already successfully demonstrated the model. Its 4 MLD plant receives and treats  the entire sewage the campus generates. Two groundwater wells dug up in a  pond receive the treated water after ultra filtration and mix it with lake water. A water treatment plant at the  lake treats water and it has been supplied inside the campus since 2017. “The difference between the IIT-Madras model and our plant is we have an additional activated carbon filter since we intend to use the water for drinking purposes. IIT-Madras professor Ligy Philip, who pioneered their model, is working with us,” said a Metro Water official.

When contacted, Ligy Philip told Express, “It’s a good initiative from the government. Here in IIT-Madras, we have achieved excellent results. The government plants will have additional layers of purification like sand filters and activated carbon filters, which will improve water quality.” Officials say the test results show the TDS levels will be 450 mg per litre and there will be no trace of E Coli/Coliform in the water, which it meets drinking water quality standards as per IS 10500:2012.
Stakeholders convinced