Tamil Nadu: 993 deaths due to road accidents in January, most on National, State highways

While National Highways are supposed to be fenced on both sides, several stretches still remain open due to a variety of reasons.

CHENNAI: Is there a flip side to developing wider, bigger roads? Yes, if adequate safety features are not provided, considering that motorists tend to travel at greater speeds on wider roads. Recent data on road accidents in Tamil Nadu in the month of January shows that fatalities due to road accidents is less on narrow roads compared to wider ones.

Over 70 per cent of accidental deaths in the State, between January 1 and 31 occurred on State and National Highways. According to official records of State Crime Records Bureau (SCRB), a total of 993 persons died in 5,173 road accidents in January 2019. The fatalities for the corresponding period last year was much higher at 1,189. Of this, 360 deaths happened on National Highways and 332 were on State Highways -- 36.25 per cent and 33.43 per cent respectively. 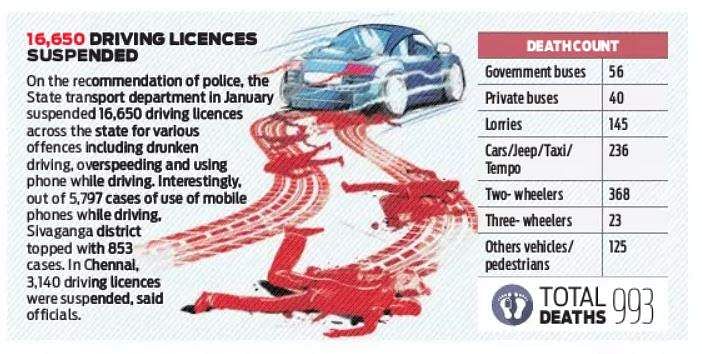 While State Highways have a width of 20-60 feet and National Highways 60-200 feet, district and village roads are just around 10-30 feet. Officials point out that higher fatalities on highways is due to lack of safety features.

"Various measures and strict action against violation have brought down fatalities, but a sudden reduction in deaths is not possible due to missing safety features," they say. For instance, while National Highways are supposed to be fenced on both sides, several stretches still remain open due to a variety of reasons.

"Many important junctions are yet to get flyovers or underpasses, thanks to local opposition to land acquisition among other issues. The accident rate may witness a significant dip if these issues are resolved," say National Highways officials.

"Except the roads that pass through in Chennai, Madurai, Coimbatore, Tiruchy and other urban areas, over 90 per cent of State Highways roads have no median. A proposal to build dividers at accident-prone spots has been sent to the government," highways sources said.