PUDUCHERRY : Welcoming the verdict of the Madurai bench of the Madras High court that the Puducherry Lt Governor cannot interfere in the day-to-day affairs of the administration, Puducherry Chief Minister V Narayanasamy on Tuesday said the judgement was a victory  for the people of the Union Territory (UT).Responding to questions from news persons, Narayanasamy said the verdict was a victory to ensure the development of the UT. Also, he demanded that Lt Governor Kiran Bedi should tender an apology to the people of Puducherry. 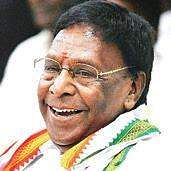 It may be noted that the Ministry of Home Affairs (MHA) on January 27, 2017, issued an order stating that the Lt Governor had powers to intervene into all the affairs of the administration and seek required files. K Lakshminarayanan, parliamentary secretary to the chief minister then moved the court, seeking it to quash the order of the Home Ministry.

Justice Mahadevan of the Madurai bench, in his ruling on Tuesday, maintained that the Lt Governor did not have powers to intervene in the day-to-day affairs of the government and that the order of the MHA will be one depriving the rights of the elected government.The Chief Minister said he had written to the MHA after a five-member constitution bench of the Supreme Court (in a case filed by Delhi Chief Minister Arvind Kejriwal) ruled that the Lt Governor did not have any special powers and should cooperate with the elected government to ensure the development of the UT.

It also ruled that the decision of the cabinet was final. Narayanasamy said when he had written to the Home Ministry, citing this judgement that SC ruling would be applicable for Puducherry, the MHA maintained that the Lt Governor was having powers in Puducherry.Opposing this, Lakshminarayanan moved the Madras High Court and senior lawyers like P Chidambaram, Gopalan and Sunderasan appeared in the case. The Madurai bench pronounced the judgement in favour of Lakshminarayanan.

The justice had won with the pronouncement of this historical judgement, the CM said. “This is a victory for the people of Puducherry.”It may be recalled that the CM and his cabinet colleagues had resorted to a dharna seeking approval on over 30 matters pertaining to schemes, salaries and the administration.

Now we are on Telegram too. Follow us for updates
TAGS
V Narayanasamy