DHARMAPURI: Pappireddipatti parliamentary constituency recorded 89.67 per cent polling in the eight booths of Nathamedu, Ayyampatti and Jallipudur villages that went for repolling on Sunday. Collector S Malarvizhi and Superintendent of Police (SP) Rajan oversaw proceedings and visited every booth.

Speaking to reporters, the collector noted that security at the booths had been intensified given the sensitivity of the repolling. Over 600 police personnel led by Inspector General of Police Periyanna, Deputy Inspector General of Police Senthilkumar and SP Rajan kept up a tight perimeter around each booth and there was no breach, she said. Central reserve forces added to the security measures too. Three checkpoints were set up in each centre; mobile phones, electronic equipment and vehicles were banned, she detailed.

The election was conducted in a fair, free and peaceful manner; live stream from all booths was relayed from the three cameras at each place, she added.
DMK Lok Sabha candidate S Senthilkumar and Pappireddipatti by-election candidate A Mani visited the polling booths. Senthilkumar, whose petition led to the repolling, said that the security measures were sufficient. They expressed confidence in the Secular Progressive Alliance winning by a large margin in the elections. 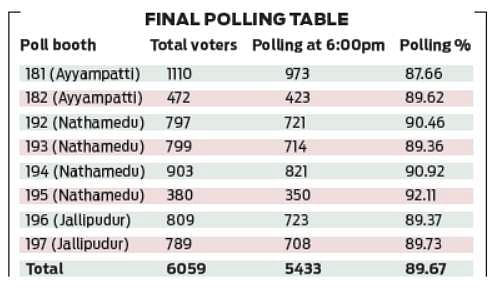 Now we are on Telegram too. Follow us for updates
TAGS
Pappireddipatti parliamentary constituency repolling