AIADMK had given the Arakkonam seat to its new-found ally PMK -- which had till then been carrying out a vitriolic campaign against the ruling dispensation.

VELLORE/CHENNAI: Despite elections in Vellore being countermanded over allegations of voter bribing by the DMK candidate, the party managed to wrest control over the neighbouring Arakkonam, Tiruvannamalai and Arni segments. AIADMK had given the Arakkonam seat to its new-found ally PMK -- which had till then been carrying out a vitriolic campaign against the ruling dispensation.

Despite the PMK winning the Arakkonam seat comfortably in 2014, its candidate AK Moorthy suffered a crushing defeat this time in the hands of DMK’s S Jagathrakshakan. Moorthy’s hopes of capitalising on the caste sentiment failed. “The victory belongs to our party leader,” says DMK cadre in the region.
“People voted for us because of the faith they have in Stalin,” says DMK district secretary and MLA R

Gandhi. It’s not the defeat but the margin of the defeat that seems to have become a concern for AIADMK and its allies. A senior AIADMK leader blames it on the absence of late leader J Jayalalithaa. “When Amma was there, the dictum was to perform or perish. Each leader and functionary were accountable to outperform the rivals.”

In Tiruvannamalai, veteran AIADMK leader and former minister Agri SS Krishnamoorthy was defeated by DMK’s CN Annadurai. Krishnamoorthy was allegedly facing some resistance as sitting MP R Vanoraja was not renominated to make way for the minister.

“The lack of cooperation dealt a heavy blow,” said a local AIADMK leader. Arni, too, dumped sitting MP ‘Gingee’ Seval V Elumalai and chose Congress’ MK Vishnu Prasad, who managed a comfortable victory. “We have to revamp the party’s organisation and revitalise units by infusing fresh blood,” claimed an AIADMK leader from the region, responding to the debacle.

Victory for newbie
In his first ever election, DMK candidate Gautham Sigamani had a sweeping victory against L K Sudhish of the DMDK in the Kallakurichi Lok Sabha constituency on Thursday. Sigamani, the son of party’s senior leader Ponmudy, secured 7,21,713 votes, while Sudhish got 3,21,794 votes, losing by a margin of 3,99,919 votes. Sigamani said, “I am grateful to all cadre and the leaders, who guided me, and the people of Kallakurichi constituency

Huge win
CM Edappadi K Palaniswami and Deputy CM Panneerselvam said that BJP and it alliance parties had achieved a massive victory.  “This is a fruition of PM Modi’s good governance. Besides, people have made the rest of the world wonder how they had strengthened democracy.  So, all need to be greeted.” 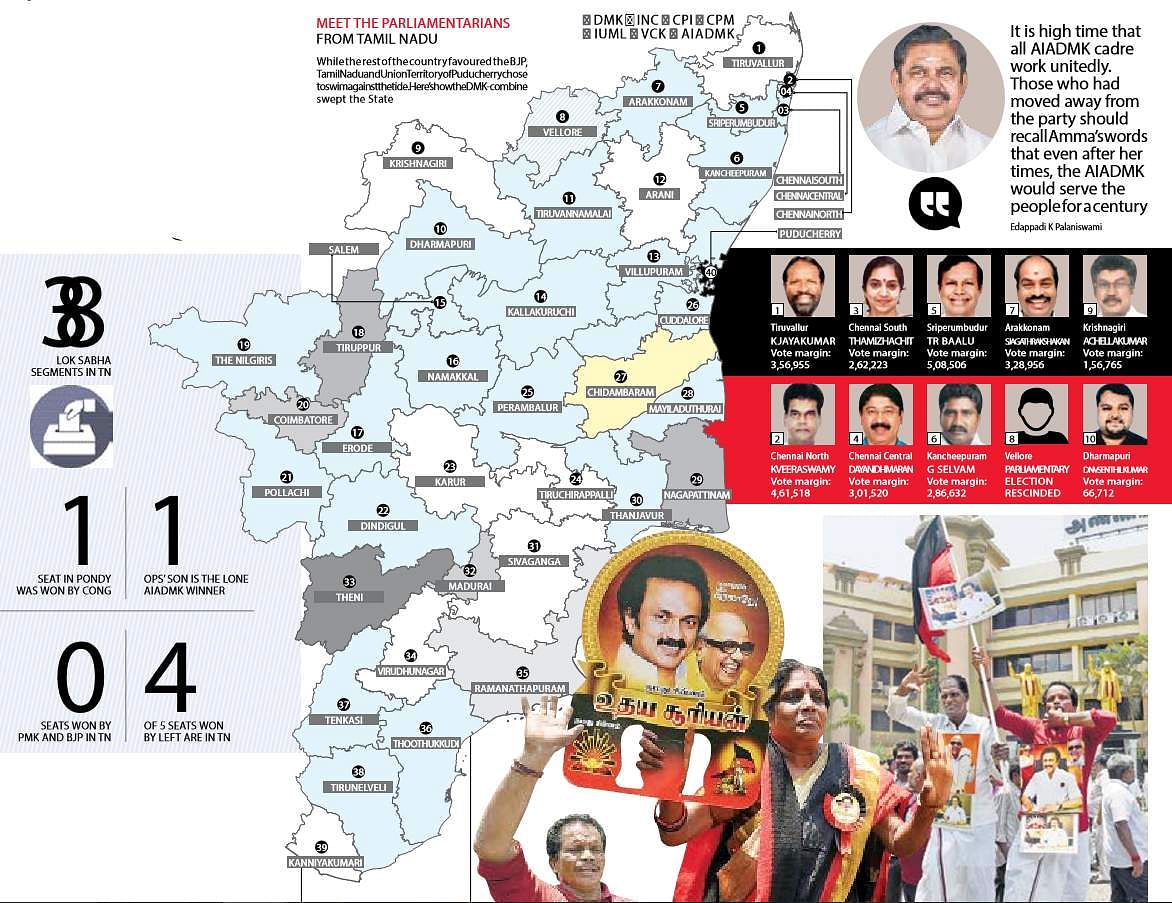 Now we are on Telegram too. Follow us for updates
TAGS
AIADMK DMK PMK Tamil Nadu bypolls