Five meetings in two days: Here's the agenda for Modi-Xi summit at Mahabalipuram

Modi and Xi will hold five meetings on Friday and Saturday, according to an MEA media advisory.

The summit will provide an opportunity for the two leaders to continue their discussions on overarching issues of bilateral, regional and global importance.

Modi and Xi will hold five meetings on Friday and Saturday, according to an MEA media advisory.

The two leaders will be taken on a guided tour of Mahabalipuram for an hour at 5 pm on Friday. They will visit three monuments – Arjuna’s Penance, Pancha Rathas and Shore Temple - all UNESCO World Heritage Sites.

A cultural programme will be organised at the Shore Temple at 6 pm. At 6.45 pm, Modi will host dinner for President Xi before he leaves for Chennai to spend the night.

The two leaders will hold informal talks on Saturday at Taj Fisherman’s Cove Resort & Spa, a five-star hotel overlooking the bay, at 10 am. They will again meet at 10.50 am for the delegation-level talks and for lunch before the Chinese President departs from Chennai at 1.30 pm. 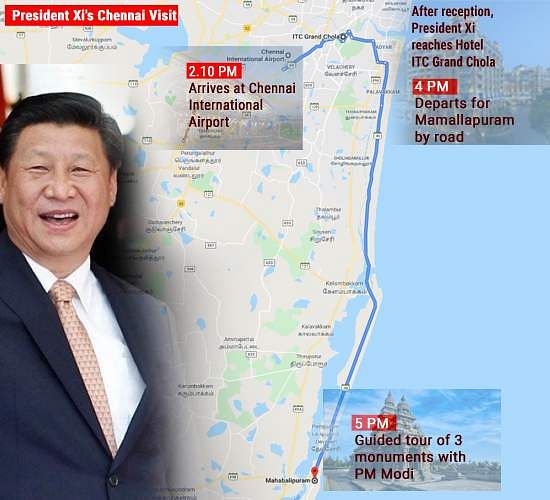 According to reports, the two sides are likely to discuss issues relating to Ladakh, China’s 5G network policy, counter-terrorism and sustainable marine economy. Xi’s visit also comes at a time when the Indian Army is holding its largest mountain combat exercise in Arunachal Pradesh. Irked by the war drill, China has complained to India about it.

Now we are on Telegram too. Follow us for updates
TAGS
Mahabalipuram Sino-Indian relations Narendra Modi Modi Xi Summit