Hours after the dignitaries left, hundreds of tourists thronged Mamallapuram on Saturday, to take advantage of the new facilities and beautification works.

CHENNAI/TIRUCHY: Hours after the dignitaries left, hundreds of tourists thronged Mamallapuram on Saturday, to take advantage of the new facilities and beautification works. Pancha Rathas, Krishna’s Butterball and Lighthouse were thrown open to the public again. However, much to the disappointment of tourists,  the Shore Temple was not open due to maintenance reasons. It will be opened to the public from Sunday.

Arches made of fresh fruits and vegetables were erected at several places, to welcome the leaders. Some visitors managed to take some of the fruits home on their way back. To hide the beach areas, beautifully painted make-shift walls had been raised for about 500 metres near the Shore Temple and Krishna’s Butterball. 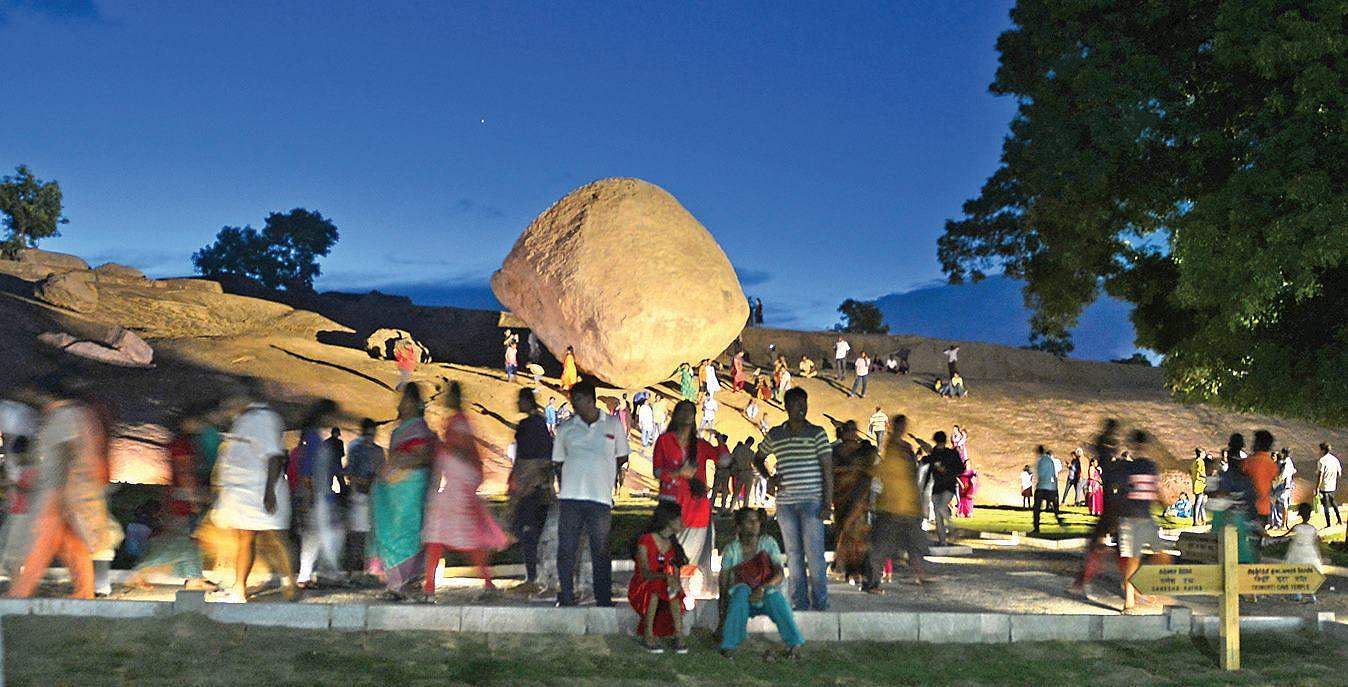 India-China flags were flying high on the medians of roads leading to the monuments. Most of the vendors, including stone sculpture sellers, opened their shops minutes after the summit was over. Tourists who gathered after the summit said they were amused to see Mamallapuram this way.

‘’In 40 years, the monuments have not looked this decorative with colourful lights. It was very beautiful and this (event) will surely promote tourism. The government should maintain the place everyday’’ said Prabhakar B, a tourist. Mamallapuram, which was known only for its monuments, will now be remembered for the historic summit too.

“In future, we cannot talk about Mamallapuram without mentioning Prime Minister Narendra Modi and Xi-Jinping. The place will tell good things about Indo-China relationship,’’ said Senthil Kumar, another tourist. Civic facilities kept in public places for the summit are a boon for locals. Water tanks, waste bins and toilets were provided near important monuments.

Meanwhile, people across the State have put forward requests for the facilities created at the tourist spot for the summit, to be maintained. Officials at Mamallapuram Town Panchayat have assured that these facilities will not be removed and will be for future use. Tourist inflow was in huge numbers on Saturday and more people are expected to visit the temple town on Sunday.

Lighting arrangements on this historic site and its monuments such as Arjun Penance, Panch Rathas, Krishna’s Butter Ball has caught the world attention. “The State should maintain these arrangements in the historic sites for a few more days not only for tourists but also residents,” said former state minister N Nallusamy. “The wide coverage of the meeting of the two world leaders will definitely increase the tourist flow to this location. Therefore, the government should maintain these arrangements,” said S Venkitachalam, a tour operator based in Tiruchy.

Invite extended to defence minister
CHINESE President Xi Jinping has suggested enhancing “mutual trust between militaries of India and China, said Foreign Secretary Vijay Gokhale. “China has extended an invitation to the defence minister of India to visit China. The dates would be discussed through diplomatic channels,” he said. Jabin Jacob, China watcher and adjunct research fellow at the National Maritime Foundation, said increasing military interactions between the two countries was a good idea.

‘Symbol’ic display of saree politics
About 500 women belonging to over 50 Self-Help Groups were engaged by the ruling party to welcome Xi at the city airport. They were sporting pink sarees on Friday, while welcoming him to the city, and green sarees on Saturday when he returned to the airport.

“Pink represent’s BJP’s lotus symbol and green AIADMK’s two leaves,” said a woman from Perungudi. They were brought in five MTC buses from various parts of the city.

Now we are on Telegram too. Follow us for updates
TAGS
Mamallapuram Xi Jinping Narendra Modi