Thousands of Chennaiites light lamps, burst crackers in show of unity in COVID-19 fight; but distancing norms ignored in a few places

CHENNAI: With most streets in the city doused in darkness, lamps lit along terrace ledges and balconies showed that the nine-minutes’ lights off request by Prime Minister Modi was a  success in Chennai. There were also scenes of fire crackers lighting up the sky and phone torches being turned on in a show of solidarity. However, in many places people crowded on streets and house terraces to light lamps, clearly breaking the social distancing protocol. 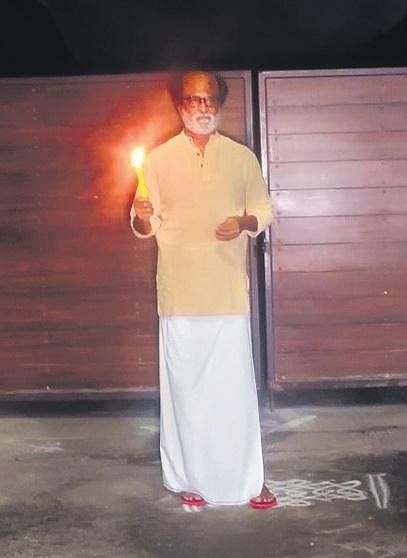 In thickly populated areas like Velachery, Egmore, Mylapore and along OMR, many apartment complexes switched off lights even in their common areas. Candles, earthen lamps, torch lights, phone torches were clearly visible from every house. Amidst a tightly-enforced lockdown, it was surprising to see people finding and bursting firecrackers.

On Twitter, hashtags supporting and rejecting Modi’s request were trending throughout. Hashtags like #9baje9minute, #Diwali, #DiyajalaoBharatJodo, #Vilakkuetramaatom (in tamil) were trending. Also, videos explaining the apparent astrological meaning behind this activity were widely circulated in WhatsApp groups.

While there was no major technical glitch after this exercise, a few areas reported voltage fluctuations. A few streets in Shollingnallur did not get the power back for almost 40 minutes, said residents.In a press briefing, State Electricity Minister, P Thangamani said  power demand in the State witnessed a dip of around 2,200 MW, more than what the officials had anticipated. “In the morning we estimated a dip of 1,200 MW across the State. But though it was more than what we anticipated, there were no major incidents reported. Power supply was back to normal at 9.11 pm as planned. At around 10 pm, the demand stood at 10,200 MW,” he added.

Rajini joins Chennaiites
Actor Rajinikanth was among many who lit lamps on Sunday at 9 pm for nine minutes following the appeal made by Prime Minister Narendra Modi. He lit a candle at the entrance of his Poes Garden house. Meanwhile, Governor Banwarilal Purohit lit a candle at Rajbhavan.