A Coimbatore-based engineer, his team and students of Rathinam Group of Institution have created a low-cost face shield for corona warriors.

CHENNAI: On March 22, as the nation locked itself in observing the government-ordered Janta curfew, Coimbatore-based Ebin Ephrem Elavathingal, senior manager at AIC Raise, and his team — student start-up JK Data Systems incubated in AIC Raise, supported by Atal Innovation Mission, NITI Aayog and students of Rathinam Group of Institutions, Coimbatore — came up with an idea.

A version of face shields to protect the essential workers in the frontlines of the pandemic.

Now, three weeks later, with over one lakh shields distributed across the country, they’re not done just yet, creating a working prototype of an Intermittent Positive Pressure Breathing ventilator (IPPV).

The five-member team headed by Ebin and comprising the student start-ups by Karthik S, Gowtham Santhakumar and their team, with support of the Bio-Medical and Computer Science department of Rathinam College, are the people behind this ambitious project.

But despite their remarkable final model, you’d be surprised to find out that none of them has any prior experience with medical equipment.

“Once we started watching the global news and understanding the urgent need for ventilators in this pandemic, we immediately dropped what we were working on, and began to educate ourselves about ventilators through open source libraries and other resources,” says Ebin. Within a week, they already had their first prototype with basic features. 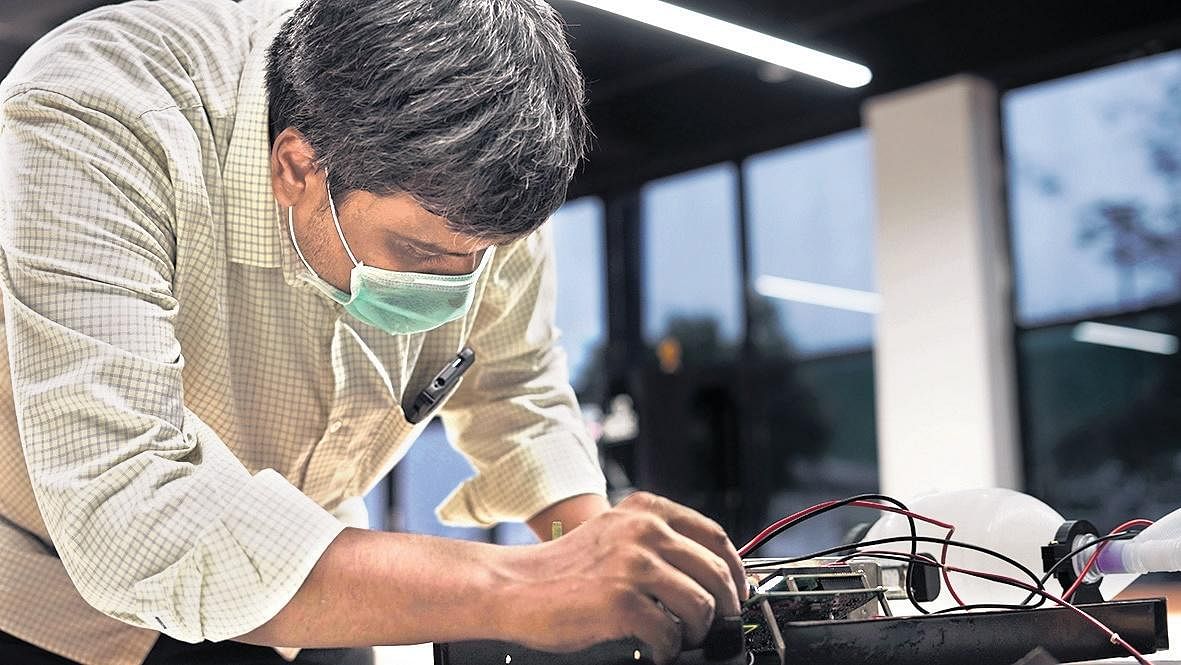 But keen on enhancing the model even further, the team re-engineered the design of an international open-source ventilator project to produce their second working prototype, with improved control facilities, within four days.

“We haven’t gotten an Indian Council of Medical Research (ICMR) license yet, but this device can monitor control of the tidal volume, breath per minute and inspiration expiration ratio adjustments. It is also enhanced with pressure, flow and oxygen monitoring systems,” he explains. With most of the country’s ICU ventilators costing over Rs 5 lakh, their simpler model comes in at just Rs 25,000, with the basic first prototype at RS 10,000.

Ready to take the next steps, Ebin assures us that they are currently at a production capacity of 100 ventilators a day.

Once they receive government approval, the team is ready to spring into action. “Our thoughts upon taking up this massive new project was to help save our nation. It’s as simple as that. I even quarantined myself at the office to ensure that we can truly build something of value,” says Ebin.

Still choosing not to rest on their laurels, the team is already brainstorming on their next project, something that could help in a post-coronavirus world. And while they’re hard at work on it, Ebin’s only plea — if you have the intellectual property to make a difference, now’s the time.

The five-member team headed by Ebin and comprising student start-ups by Karthik S, Gowtham Santhakumar and their team, with support of the Bio-Medical and Computer Science department of Rathinam College, are the people behind this project.