Gita is one among millions of people across the world who suffer from Obsessive-Compulsive Disorder (OCD), a condition characterised by unreasonable thoughts and fears (obsessions) that lead to compulsive behaviours. While the corona pandemic has knocked some sense into the larger public on hygiene, it has made life painful for people like Gita.

She has made her own sanitiser, out of soap solution, to disinfect everything in her room. “The compulsive behaviour is taking a toll on my thoughts. I spend most of my time making sure my environs are clean,” says Gita. Finally, Gita spoke to her doctor, who suggested taking up new activities like cooking and singing to overcome the anxiety.

Gita also diligently avoids watching TV news about the virus.  Mental health experts affirm that the pandemic and the lockdown have taken a toll on patients in the anxiety spectrum, especially ones with OCD. Clinical psychologist Kirthi Pai, who works with the Apollo Hospitals in Chennai says she has been counselling several patients with OCD since the lockdown began.

“One of my clients is the wife of a police officer,” says Kirthi Pai. “She is afraid of contracting the virus as her husband keeps working through the lockdown. Cleaning everything in the house with disinfectant has become a compulsive behaviour for her. So, I suggested some simple techniques to keep the anxiety at bay. After a couple of sessions, she managed to cope with the stress.” In Chennai, a 27-year-old journalist says he has to work through the lockdown, even though he has OCD. “I clean even my bike keys every day. I am worried the obsession might continue well after the virus is brought under control.”

'Frustrated family members'
Similarly, 65-year-old Jayanthi cleans the house every time she watches TV news or reads a WhatsApp forward on the virus. “I feel I have developed the tendency to repeatedly clean the house. I also keep instructing my family members to do so. They get frustrated beyond a point,” says Jayanthi. Coimbatore-based clinical psychologist V Hema says the symptoms can largely be brought under control by reducing news consumption. 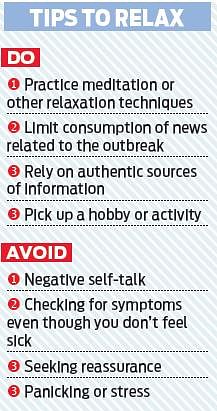 “The situation is complicated by the fact that face-to-face sessions aren’t possible now due to the lockdown,” says Hema. “But, family members can help out those among them with OCD, by helping them analyse the advantages and disadvantages of their thoughts. Those who can afford can also try video counselling.”  Psychiatrist Vivian Kapil says treatment is only needed if the obsession impairs everyday activities. “For example, some people bathe for two hours or repeatedly wash their hands. In some cases, people just can’t function because they are terrified.

If their every day functions are impaired by their distress, they should consider getting medication from a psychiatrist on an emergency basis.”  Supported by the Department of Health and Family Welfare, the Tamil Nadu Association of Clinical Psychologists (TNACP) has set up dedicated helpline numbers across districts to help people deal with the lockdown. N Suresh Kumar, secretary of the TNACP says he has observed a definite increase in anxiety levels across populations.  “More than 150 calls are received from across the State every day of which 10% are people already diagnosed with OCD. We have been providing them Cognitive Behavioural Therapy (CBT) over phone,” says Suresh.

(With inputs from Chennai, Coimbatore, Madurai, Erode and Tiruchy)

Now we are on Telegram too. Follow us for updates
TAGS
Obsessive Compulsive Disorder OCD lockdown Coronavirus