A fitting tribute to Raja Raja

Students of government fine arts college in Kumbakonam transformed the road leading to the Brihadeeswara temple into a veritable feast for the eyes.

THANJAVUR: In a fitting tribute to Raja Raja, a patron and connoisseur of arts, students of government fine arts college in Kumbakonam transformed the road leading to the Brihadeeswara temple into a veritable feast for the eyes.

Commissioned by the city corporation four months ago to spruce up the city for the consecration, students painted attractive motifs on the public wall on Raja Mirasudar Hospital road. Right from the Anna statue till Raja Rajan statue, episodes from Shiva Thandavam would give one company. Not just these, lively images of  Tolkappiayar, Kaniyan Poonkundranar, Veeramamunivar, Bharthiyar, Bharathidasan, Avvayar dot the stretch.

The civic body roped in private players to sponsor the beautification work. Students were engaged as and when sponsors were found. Around 130 panels are painted on the wall on the left side of the road, all panels equal in dimension. Students of Bachelor of Fine Arts (BFA) and MFA were involved in the project, said B Murugavel, MFA student who was one of the coordinators.

In the initial panels, portraits of Tamil scholars including Tolkappiayar, Kaniyan Poonkundranar, Veeramamunivar, Bharthiyar, Bharathidasan, Avvayar were drawn. Following this are 108 dance poses of Lord Shiva painted in as many panels. 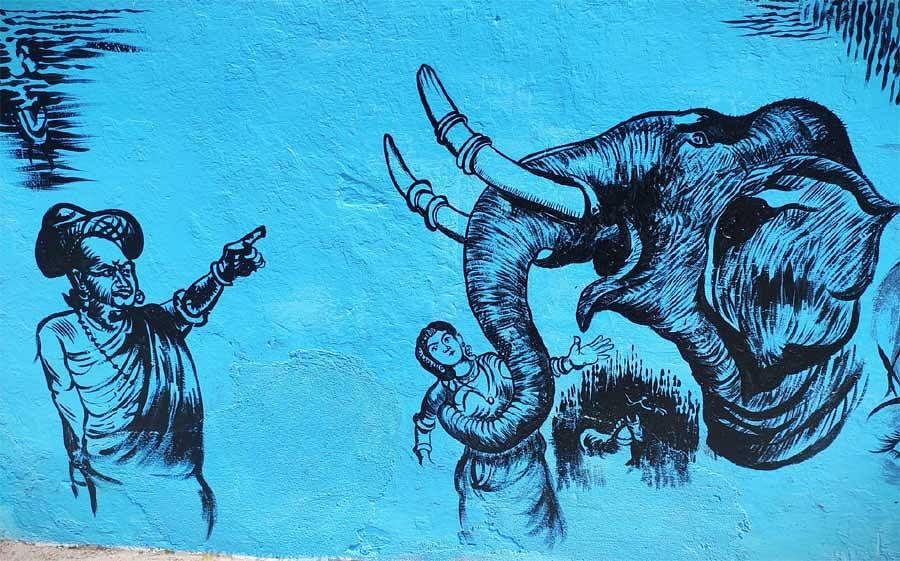 Besides, there are panels depicting crafts of Thanjavur including the thalaiyatti bommai (rocking doll), traditional Tamil games, and traditional food. There is also a panel depicting Raja Raja I supervising the construction of the Big Temple. Of particular interest are two panels. One depicts an elephant trying to garland a person. Space for the person is left vacant, stand there and you can click a selfie of the elephant garlanding you!  Another one depicts a painting of a plough - Stand near it, it would seem you are holding the plough.

Not just walls on hospital road, the compound of the Tilakar Thidal has been spruced up. The stretch has 70 panels featuring scenes from Kalki Krishnamurthy magnum opus Ponniyin Selvan.  The novel speaks of the early life of the emperor Raja Raja who was born as Arulmozhi Varman.  The paintings have exquisite scenes from the novel including wars, the kings on horses, court scenes etc.  The paintings are a reproduction of the ones painted by famous artist Maniam for the novel. The entire panels for depicting Ponnyin Selvan was sponsored by a private bank, sources said.

Now we are on Telegram too. Follow us for updates
TAGS
tribute Raja Raja fine arts