The four-minute film -- Vidikalai Mathi (obey the rules) -- aimed at raising awareness on road safety rules was produced on a budget of Rs 12,000.

TIRUPUR: Little did a bored bunch of students from Karanampettai Government Higher Secondary School know that a brainstorming session with their teachers would give them hands-on experience in making a short film for a cause. The four-minute film -- Vidikalai Mathi (obey the rules) -- aimed at raising awareness on road safety rules was produced on a budget of Rs 12,000. On Saturday, the video was released in CDs and on social media platforms by Chief Education Officer R Ramesh in the presence of Karanampettai Panchayat President Kavi Palanisamy. 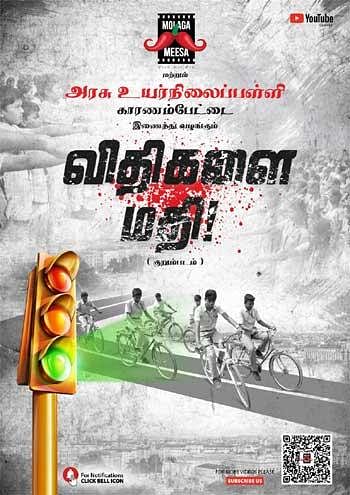 Speaking to TNIE, its Headmistress Vinnarasi said, "Road Safety Club is one of the many clubs functioning in the school with students from class VI to IX. Although many awareness programmes and rallies were organised throughout the year, the students were wanted to do something creative for the public welfare. It was then that we had a discussion and decided to produce a short film. Although the production was taken care of by the teachers and the students, visual media students from a neighbouring college helped to film the video."

About budgeting, she said that they had to spend around Rs 12,000 to shoot the film by casting the students in two days. The amount was shared among students, teachers and headmistress.

Now we are on Telegram too. Follow us for updates
TAGS
Vidikalai Mathi road safety short film