While farmers in areas covered welcome bill, those left out are upset

CHENNAI: The Bill on Protected Agricultural Zone (PAZ) has been met with mixed reactions. While farmers in the areas covered by it have welcomed the government’s decision, those left out — in Tiruchy, Karur, and Ariyalur, which were excluded from its ambit — are a disappointed lot. Speaking at the Assembly on Thursday, Law Minister CVe Shanmugam reasoned out why these three districts were left out.

“There are many key industries in these districts, and the State has to pay equal attention to agriculture and industrial growth. Industries and agriculture are like two eyes of the State,” said the minister. 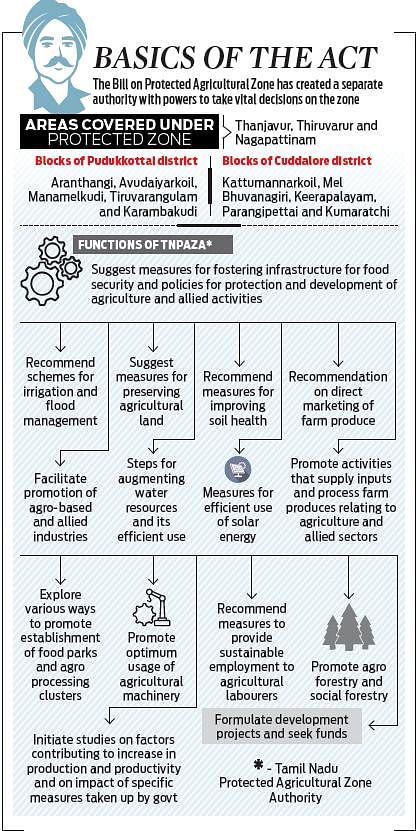 Industry scare
“Our State has the second-biggest economy in India, next only to Maharashtra. By including districts in these zones under the PAZ, we must not create a fear psychosis among existing industrial players. Karur, for instance, is a district that earns huge foreign exchange,” he said. He further said: There are 31 petroleum and natural gas units in the State. They have been here for the last 40 years. They are not connected with hydrocarbon projects. Till date, there have been no protests against these units for ruining agriculture. Permission for feasibility study for hydrocarbon project was given only to two companies — first in 2011 and recently in Neduvasal in 2014.

“Both did not happen as the State refused approval,” he said. “We did not involve hydrocarbon projects straightaway in this legislation since it would clash with the Central laws. As such, we have projected safeguarding the agricultural lands as our priority. So, the State has full powers to enact this legislation,” Shanmugam added. In his reply to the State dated February 19, Union Environment Minister Prakash Javadekar said the State government would be the final authority in allowing any particular project in any region within the State. This bill will not affect the infrastructure developments in delta areas like harbour, pipelines, road, telecommunications, power, water supply and other utilities.

‘We feel discriminated’
Still, the reasoning has brought little relief to farmers in these districts, who were hoping for a lifeline. “Farmers in 2.4 lakh acres in six blocks in Tiruchy depend on the Cauvery. We had to protest for more than a decade to be considered as part of delta.  Now, we feel discriminated,” said Ayilai Siva Sooriyan, district secretary of Tamil Nadu Farmers Association, Tiruchy. Maniyarasan of the Cauvery Rights Retrieval Group lamented the Bill does not stop existing industries. “With about 4,000 acres already given to hydrocarbon projects, the PSAZ has no powers to save agriculture,” he alleged.

Ariyalur-based activist Thanga Shanmugasundaram rued mineral resources would be plundered if the district is not included in PAZ. “T Palur and Thirumanur have been part of the delta since 1947. It saddens us that this district is not declared a protected agricultural district.” When leader of Opposition MK Stalin raised the issue in Assembly, CM Palaniswami said: “Legal experts opined that banning existing units could create legal complications.” Subsequently, when Stalin asked why real estate was not banned by the Bill, the CM said: “We cannot stop farmers from selling their land if they are in need. That would affect them very much.” S Ramadoss, a farmer-representative, said, “The government must make sure that Cauvery water is released for irrigation twice a year for agriculture to prosper in the delta region.”

Why no bar on existing firms?
P Maniyarasan, coordinator, Cauvery Rights Retrieval Committee (CRRC), alleged that as existing projects are not affected companies that got clearance for hydrocarbon extraction would not be banned. “This means the Act would not bar the exploration for hydrocarbons at the sites for which licences have been given to Vedanta and ONGC. This contravenes the purpose.” V Sethuraman, State resource person of the Tamil Nadu Science Movement pointed out that the authority did not have representation from farm workers. PR Pandian, general secretary, Tamizhaga Cauvery Vivasayigal Sangam, welcomed the Act and wanted the Centre to give its consent to it.

R Pandurangan, another farmer-representative said, “We welcome the bill as hydrocarbon projects will not adversely affect our farm lands anymore. Some of the norms could be relaxed a few years later to make land acquisition easier for beneficial government initiatives like a medical college.” With inputs from MS Thanaraj (Tiruchy) Aravind (Karur), Thiruselvam (Ariyalur) and N Ramesh (Thanjavur)

‘Land prices will fall’
Farmer representative ‘Cauvery’ V Dhanabalan, said: “All barren lands should be made fertile before enforcing the Act. The prices of fertile land will fall after PSAZ Act comes into implementation. It will not help the farmers who wish to sell their land due to poverty or due to personal requirements.”

Equal attention to industries
This Bill will not affect the infrastructure developments in delta areas like harbour, pipelines, road.

‘State has sought clarifications from Centre over NPR’
Chennai: The State government has sought clarification from the Central government, regarding certain new details included in the National Population Register Manual, 2020, and is yet to get a response. Revenue minister RB Udhayakumar informed the Assembly on Thursday that the new manual requires to collect certain details like mother tongue, birthplace of parents, Aadhaar number and other ID details.

“We have certain doubts in these issues and sent a letter to the Central government (seeking clarifications). We are yet to get a response. We have not announced any date for conducting the NPR. So the public, especially the minorities, need not panic over the same,” he said.