Three companies are planning to invest a whopping `1,254 crore in Tamil Nadu in projects that could generate around 15,000 jobs.

CHENNAI: Three companies are planning to invest a whopping Rs 1,254 crore in Tamil Nadu in projects that could generate around 15,000 jobs. MoU were signed with these three firms on Friday by Chief Minister Edappadi K Palaniswami at a diplomatic outreach event.

Korean firm Hanon Automotive will invest Rs 500 crore to set up a facility in Malrosapuram in Kancheepuram district, while US-based Jogo Health, which initially signed a pact to invest Rs 15 crore, has upped the ante to a mega Rs 250 crore. Mitsuba Sical will invest Rs 504 crore in SIPCOT Industrial Complex, Gummidipoondi. Showcasing the State’s investment potential to diplomats from 38 countries during the diplomatic outreach event, Palaniswami also laid the foundation for Tamil Nadu Polymer Park, a project of TIDCO and SIPCOT on 257 acres of land in Puzhuthivakkam in Tiruvallur district. With an investment of Rs 217 crore, the Park is expected to attract investments worth Rs 3,000 crore and generate over 7,000 new jobs.

A pact was signed to begin works on the Chennai-Bengaluru Industrial Corridor. A master plan for the Ponneri Node of the corridor is being prepared by the Delhi-Mumbai Industrial Corridor Trust. State government’s TIDCO and Central agency NICDIT have joined hands to develop Ponneri.

The CM also released a handbook 'Doing Business in Tamil Nadu', a guide for investors while highlighting the investment potential of the State for the manufacturing sector, IT & ITeS, research and development, food processing, and infrastructure among others. TS Tirumurti, External Affairs Ministry (Economic Relations) Secretary, said the ministry had effectively served as a point person for the outreach of all States and UTs in attracting foreign investments.

"The idea is to take India's economic diplomacy to local stakeholders and provide them a platform to participate in investment and trade opportunities available abroad," said Tirumurti, adding that the efforts were in line with the Centre's commitment to cooperated federalism and the PM's vision of Team India.

P Harish, additional secretary of Ministry of External Affairs, highlighted the need for greater engagements between the States and provincial governments of various countries while highlighting the relevance of sister-state partnerships. 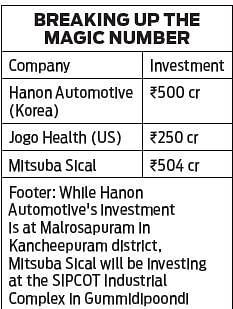 Now we are on Telegram too. Follow us for updates
TAGS
Edappadi K Palaniswami