A sea of change, indeed

The researchers observed that occurence of low pressure formations on four dates greatly reduced the temperature and prevented mass bleaching.

THOOTHUKUDI: Good news for all! The Gulf of Mannar Marine Biosphere which suffered 28.20 per cent of coral bleaching this summer has started recovering, thanks to the dip in temperature.

A study by researchers from the Reef Research Team (RRT) of Suganthi Devadason Marine Research Institute (SDMRI), recognised by Manonmaniam Sundaranar University and UGC, revealed the reduction in the temperature.

The researchers observed that occurence of low pressure formations on four dates -- April 30, May 13 (Cyclone Amphan), May 22 and May 31 (Cyclone Nisarga) -- greatly reduced the temperature and prevented mass bleaching. The study was conducted in association with the Gulf of Mannar Marine National Park (GoMMNP), Ramanathapuram.

According to the report submitted to GoMMNP Wildlife Warden A S Marimuthu, the corals started to partially bleach when the temperature of water touched 31.8 degree Celcius in April 2020 in Gulf of Mannar. The prevalence of bleaching which was less than five per cent in April spiked to 28 per cent as high temperature continued till May with the highest level being 31.9 degree Celsius.

Among the islands, Koswari Island suffered the highest bleaching with 38.40 per cent followed by Vaan and Kariyachalli Islands with 34.80 and 34.70 per cent, respectively, the report said.

According to experts, a total of 18 coral genera have been found affected by coral bleaching in Gulf of Mannar during this summer, and among them, Montipora is the most affected coral genus with 29.27 per cent followed by Porites with 27.79 per cent. Acropora has a bleaching prevalence of 14.60 per cent. The commonly affected coral species include Montipora digitata, M. divaricata, M. foliosa, M. hispida, Porites solida, P. lutea, P. lichen, Pocillopora damicornis, Acropora formosa, A. cytherea, A. nobilis, Favia pallida, Goniastrea retiformis, Turbinaria mesenterina, Favites abdita and Platygyra lamellina, the report said.

SDMRI Director Dr J K Patterson Edward told TNIE that the extent of damage and the pattern of the bleaching in Gulf of Mannar were not proportionate to the high water temperature, and that it could be attributed to the high water turbulence, winds, rainfall and cloudy atmosphere caused by the low pressure and tropical cyclonic storms in the Arabian Sea and Bay of Bengal between April and May 2020. 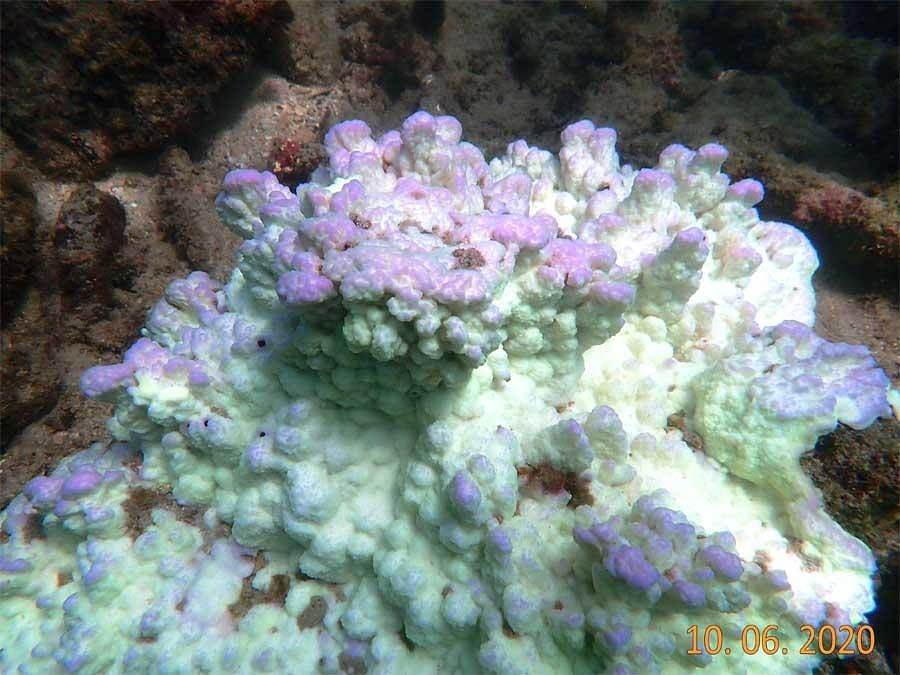 He added that the decreasing temperature (28.6 degree Celsius) since the start of June had helped the corals to restore their zooxanthellae. It is expected that the bleached corals in Gulf of Mannar would completely recover by the end of July without facing any mortality, if the present climatic condition continues, he added.

Corals in GoM are prone to bleaching during every summer given that the water temperature crosses 30 degree Celsius. However, they recover as the temperature comes down, which happens usually in August, he pointed out.

Edward observed a significant reduction in sewage inflow, industrial and human activity in the recent past. The halt of fishing during the lockdown has not only helped in the improvement of overall coastal wellness, but also assisted in the improvement of reef health, resulting in enhanced fish population and faster coral recovery, he added.

GoM is one of the four major reef areas in India. It has 117 species of coral reefs in its 21 islands. Over 100,000 small-scale fishermen depend solely on the reef and seagrass associated fishing resources for livelihood. The marine ecosystem suffers significant damage by livelihood-linked human threats and climate change.