And the real winners are...

It is one thing to succeed when things are going your way, and another when the odds are stacked up against you at that point in life ,

CHENNAI: Ever since she moved to Perumbakkam after her 10th exams, N Keerthana had her work cut out for her. Her parents, who lost their jobs when they moved here, had to focus on rebuilding their lives, setting up a small grocery shop within the Slum Clearance Board resettlement premises. Keerthana’s job was mainly cooking. On weekdays, she would make the dinner; on Sundays and holidays she would cook all three meals. Amid the chores, she studied and managed to score 492 out of 600.

“I had always been a good student so I was sure I would get a good score. I didn’t take any tuition, I taught myself,” she says. Keerthana was a student of a private matriculation school in Thalambur. Keerthana’s family was resettled to Perumbakkam after being evicted from Thiruverkadu where her father Nagamuthu handled the accounts of a small company while her mother ran a tailoring shop. Together, they had made close to Rs 40,000 a month.

“When we moved here, they decided to open a shop because both of them were without jobs, they had some savings,” she says. The family now makes around Rs 18,000 a month. Her older brother works as a mechanic in a relative’s workshop. Their shop is right in front of the 9th block of the Tamil Nadu Slum Clearance Board (TNSCB) resettlement site where they live.

When her parents began setting up a business for the first time in their lives, Keerthana was tasked with taking care of cooking at home.  “They go to the shop at 5:30 am and come back at 10pm. So after I come back from school, I make dinner before they come. On Sundays, I cook all meals,” Keerthana says.
With them, she gets up at 5:30 am to study and then gets dressed for school. In the evenings, she studies until 9pm after which she takes care of any unwashed utensils left in the sink and prepares to make dinner.  “But they’re never at home so I get the whole house to myself; I use this time to study,” she adds.
Her favourite subject was Tamil. She wants to become a Chartered Accountant. 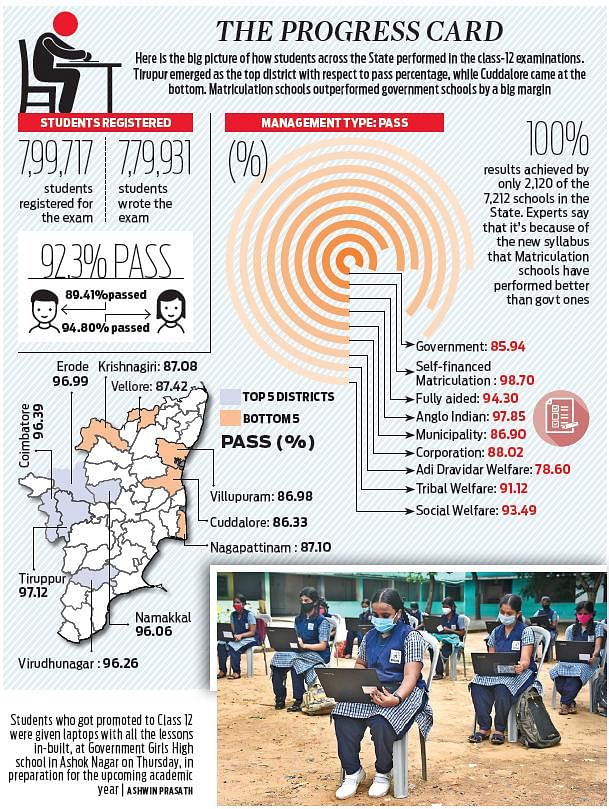 Now we are on Telegram too. Follow us for updates
TAGS
Class XII board exams

Current guidelines on reopening of activities to be applicable till November 30: Centre