With coffers drying up, TN begins austerity drive to save Rs 800 crore

CHENNAI: The Tamil Nadu government on Thursday embarked on a cost-cutting drive, expecting to save around Rs 800 crore for its coffers. The move comes within two weeks of the government raising the retirement age of its employees to save Rs 5,000 crore.

The government is trying to cut expenditure in all possible ways, a top official told Express. On how long the measures would be in force, he said, “At least for the rest of the current financial year. After that, depending on the situation, further orders will be issued.”

Faced with a huge shortfall in revenue receipts in terms of stamp duty and registration, liquor sale, fuel tax and GST among others, the government has been looking for ways to cut expenditure. The measures imposed on Thursday under many heads included hospitality, entertainment expenditure, machinery, equipment, daily allowance, travel concession and publicity.

Presentation of gifts, bouquets, shawls, mementoes, and similar articles are suspended. All official functions, including conferences, seminars, workshops and cultural programmes with more than 20 persons, except for official review meetings, are suspended.

The government has imposed a total ban on creation of new posts in all departments. However, recruitment against existing vacant entry-level posts, including appointment on compassionate grounds, will continue with the approval of staff committee. Promotions and recruitment by transfer will continue as per the existing procedure.

All official lunches, dinners and other forms of entertainment are banned until further orders, whether on government account or funded by Public Sector Undertakings or autonomous boards. Foreign travel at government cost is no longer permitted. Permission for official travel would be given judiciously and restricted only to absolutely essential official requirements. Regular review meetings should be organised through video conference and teleconference in a secure environment.

Air travel within the State is not permitted for officials unless the cost of fare is less than or equal to eligible train fare. Journey by air outside the State is also restricted and the Resident Commissioners of Tamil Nadu House in New Delhi should be deputed to attend Government of India meetings at New Delhi as far as possible.

"These measures should be enforced strictly and scrupulously by the Departments of Secretariat, heads of departments, CEOs of PSU, etc," a Government Order issued by Chief Secretary K Shanmugam said. 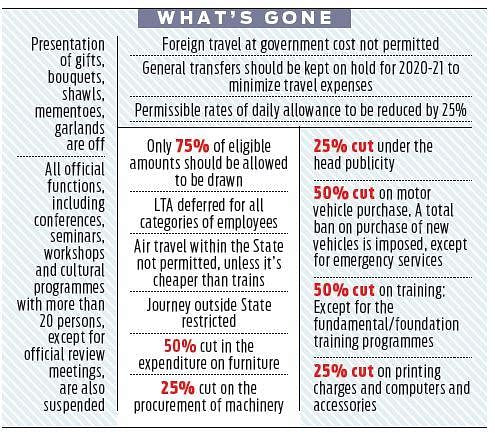 Stay up to date on all the latest Tamil Nadu news with The New Indian Express App. Download now
TAGS
Tamil Nadu infidelity