Meanwhile in a new high, nine people, including seven from Chennai, succumbed to Covid-19 in the State on Tuesday, taking the toll to 127.

CHENNAI: Chief Minister Edappadi K Palaniswami on Tuesday directed officials to implement special measures to contain the spread of the coronavirus infection in the State with a special focus on areas under the Chennai Corporation. He gave the advice while chairing the fourth round of an expert committee meeting at the Secretariat. During the meeting, matters such as testing strategies, treatment protocols, flattening the death curve, protection of vulnerable groups and preparedness in hospitals were discussed in detail. 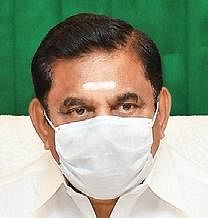 Meanwhile, in a new high, nine people, including seven from Chennai, succumbed to Covid-19 in the State on Tuesday, taking the toll to 127. Also, the State recorded 646 fresh cases driving up the tally to 17,728. The day witnessed 611 patients being discharged taking the total number to 9,342. The number of active cases stands at 8,256.

Among the day’s victims, eight had co-morbid conditions such as systemic hypertension and diabetes while one had no co-morbidities. Chennai’s situation remained grim with 509 more cases reported on the day, taking the city’s overall tally to 11,640. Meanwhile, a 24-year-old Coimbatore native, working at a five-star hotel in Chennai, has tested positive after his arrival at Coimbatore airport.

In a statement on Tuesday, IndiGo said the passenger had travelled on its flight 6E 381 from Chennai on Monday evening. “He was seated on-board with all precautionary measures. The operating crew has been grounded for 14 days and we are notifying other passengers,” the statement said.

Among fresh cases, 54 people were returnees from outside, including five from Dubai and 35 from Maharashtra. As many as 9,677 people were tested on the day, taking the total number of people tested to 4.12 lakh.

More from Tamil Nadu.
Now we are on Telegram too. Follow us for updates
TAGS
Edappadi K Palaniswami