The CM’s residence was buzzing with activity as senior functionaries and ministers made a courtesy call to greet their leader.

CHENNAI: Congratulatory messages continued to pour in for Chief Minister Edappadi K Palaniswami on Thursday, with ally leaders S Ramadoss of PMK and GK Vasan of TMC wishing him the best on being elected as AIADMK’s CM candidate for 2021 polls. Both of them phoned the CM and tweeted their wishes. 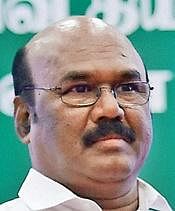 The CM’s residence was buzzing with activity as senior functionaries and ministers made a courtesy call to greet their leader. Speaking to the media, senior minister D Jayakumar said importance would be given to views of senior BJP leaders while discussing matters about the alliance for the upcoming polls.

“There is no need to respond to views of every BJP functionary in that regard.” This comes in the wake of contradicting statements by two prominent BJP leaders – the TN president of the party L Murugan and former union minister Pon Radhakrishnan. While Murugan assured that the AIADMK-led NDA combine would form the government, Radhakrishnan hinted at the possibility of a “fresh alliance.”

Now we are on Telegram too. Follow us for updates
TAGS
AIADMK Edappadi K Palaniswami