Shakthivel, who comes from an economically disadvantaged family, scored 674 in NEET without signing up for any coaching class.

Shakthivel, who comes from an economically disadvantaged family, scored 674 in NEET without signing up for any coaching class.

"Whenever someone heard that I was preparing for NEET, the first question they asked was which coaching centre I went to," he said, recalling that people's expression changed when he said that he was preparing on his own.

"They always cautioned me against it. That's what pushed me to work harder every day," he said. It took a year of commitment and working hard at the face of everyone who told him that he will never crack NEET without going for coaching.

He grew up in Guruvarajapet village in Vellore district where his father is a weaver and mother, a tailor. 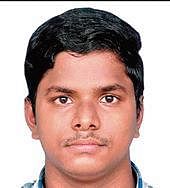 He knew he wanted to be a doctor when his mother underwent a hip-bone replacement surgery.

"She wouldn't be alive without that doctor who took holistic care of her. I was filled with respect for him. When I attempted NEET last year, I could only score 358," he said.

Unable to secure a government seat, Shakthivel was ready to explore other options for higher education when his parents said that they will work hard to provide for him if he took a gap year to study and rewrite the exam.

It was a year of watching every free video about NEET online, downloading every mock test paper he stumbled on and studying the NCERT textbooks online from cover-to-cover every single day in the gap year that made him score 674, he said. His all India rank is 1,014.

He studied in Government Boys Higher Secondary School, Guruvarajapet till Class 10 and moved to a private school as the school did not have a mathematics teacher for higher classes. "Yet it was teachers from that school that guided me and motivated me from the time I was young. I am here because of them," he said.

He told Express that government school students have the skill and potential to become doctors but, "only lacked guidance and exposure on how to get there." He wants to study at Madras Medical College because he wants to be close to his mother and take care of her health needs.

'Doctor or nurse, healthcare is my field'

Rakshanaa gaped in wonder every time she saw a doctor in white coat wearing a stethoscope. She often stood in front of the mirror and imagined looking at herself like that some day. "I have always been wonderstruck by doctors since I was a little girl. People look at them with respect because they make people better," she told Express.

She spent a large portion of her parents' savings on preparing for the test and is still unsure if she will secure a medical seat. Rakshanaa, who studied at Sri GRM Girls Higher Secondary School, a government aided school in Thiruvarur scored 330 in NEET 2020.

Her father is a pharmacist and her mother, a housewife, struggled financially and enrolled her in a private coaching during the annual holidays after Class 11. She studied for her school exams every morning and for NEET every evening. She scored 516 out of 600 in her public exams.

"I know for sure that I will land a medical seat in a private college. But my parents cannot pay for it," she said adding that her parents worked so hard to pay Rs 35,000 for one year of coaching.

"They cannot pay for a private seat. I might study nursing instead. That's how badly I want to be a healthcare worker," she said.

Now we are on Telegram too. Follow us for updates
TAGS
NEET 2020 NEET Tamil Nadu Shakthive Rakshanaa NEET