In its Unlock guidelines, the State has made the use of thermal scanners, masks and hand sanitisers mandatory at parks, malls and places of worship from Tuesday.

CHENNAI: Even as the State is preparing to unlock itself almost completely, the Health Department on Monday issued new testing and quarantine protocol for air travellers.

According to the new protocol, all international travellers, who have not got an RT-PCR test done within 96 hours before their arrival, will be tested.

But the travellers, whose RT-PCR test report reads negative, but still show symptoms on arrival at the international terminal, will also have to undergo another test. 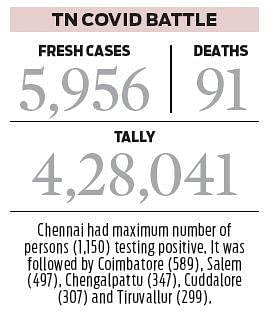 For domestic travellers, only symptomatic persons need to get tested on arrival, while others need to undergo home quarantine for 14 days.

According to the earlier protocol, all travellers coming from abroad were tested and sent for institutional quarantine, government or paid.

In its Unlock guidelines, the State has made the use of thermal scanners, masks and hand sanitisers mandatory at parks, malls and places of worship from Tuesday.

The state is also gearing up for public transport to resume operations from that day.

A mall in the city has also launched an app to pre-book an express entry.  Individual retail stores have been told to cap the number of visitors.

Meanwhile, a bulletin from MGM hospital in the city said veteran singer SP Balasubrahmanyam, who is undergoing treatment, is fully awake, responsive and actively participating in physiotherapy and is closely monitored.

Now we are on Telegram too. Follow us for updates
TAGS
Air travellers COVID 19 Tamil Nadu