CHENNAI: The sudden surge in Covid cases over the past several weeks did not prevent Tamil Nadu from coming out to choose its next government, as the State recorded 71.79 per cent polling, largely in keeping with the tradition of staying well above the 70-mark. In 2011 and 2016, the State recorded an impressive voter turnout of over 78 per cent and 74 per cent respectively. Of the 6.29 crore eligible voters in the State, 4.51 crore exercised their franchise.

Though the Election Commission framed new rules and provided a few extra facilities to maintain social distancing — for instance, a whopping 88,937 polling booths were set up this time as against 66,316 in 2016 — there were reports from across the State of voters not using them.

This election also took a big leap in improving transparency by ensuring that VVPAT machines were installed at all polling booths, a first in Assembly elections. However, complaints about malfunctioning EVMs and VVPAT machines were reported. As many as 559 VVPAT machines, 174 ballot units, and 134 control units had to be replaced. “The failure rate was hardly one per cent, and the entire election went off peacefully,” said Chief Electoral Officer Satyabrata Sahoo.

Asked about Opposition’s allegations that some VVPATs were showing only one particular party’s symbol no matter what button was pressed on the EVM, Sahoo said the allegations were “false”. While a TV channel reported a booth-capturing attempt in Velachery, Sahoo dismissed it saying no such incident happened.

Asked about the complaint filed by Thondamuthur DMK candidate Karthikeya Sivasenapathy, claiming he was being prevented from entering a booth, Sahoo said he had sought a detailed report from the DEO. However, he maintained that the incident was a law and order problem and everything is under control. Similarly, on the complaints of tokens being issued by political parties to voters, Sahoo said reports are being sought from officials concerned.

Explaining the security measures for the EVM units, which will have to be protected in strong-rooms for the next one month, Sahoo said three-tier, round-the-clock security has been arranged till votes are counted on May 2. “We have set up 75 centres for counting of votes,” he added.

Polling began on a brisk note on Tuesday, with 13.8 per cent polling being recorded between 7 and 9 am. The poll percentage then rose to 26.29 by 11 am, 39.61 by 1 pm and 53.35 by 3 pm. In the next two hours, it increased to 63.60 per cent, and ended at 71.79 per cent by 7 pm. “We received the polling data from presiding officers via mobile phone. The final figures, to be released on Thursday, will be slightly higher,” said Chief Electoral Officer Satyabrata Sahoo.

Victims of impersonation cast tendered votes
A handful of people across the State were shocked when they went to vote, since they were told that their votes had already been cast by someone else. They were then allowed to cast ‘tendered votes’

Ajith, Vijay take ‘masked’ route to ‘ride’ home a point?
As actors Ajith and Vijay went to vote, their fans got busy decoding the symbolism behind their accessories and outfits. While Ajith wore a black mask with red straps, Vijay rode a red-and-black bicycle 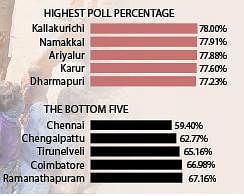