In order to project BJP as the viable political alternative to TRS in TS, we first need to make Congress weaker, says a BJP leader.

HYDERABAD: BJP, which is firm on improving its fortunes in the state by 2019, has intensified its efforts to poach potential leaders from other political parties to its fold in order to make the party become stronger.Even as TRS Rajya Sabha member D Srinivas’ son Aravind has already openly sent signals that he would join BJP sooner or later, Congress leaders — former minister Komatireddy Venkat Reddy and his brother Komatireddy Rajagopal Reddy — belonging to Nalgonda district, are also said to be giving a thought to the proposal offered by BJP, urging the duo to join it. 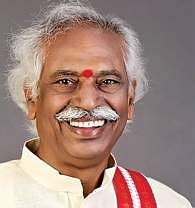 “Komatireddy brothers are unhappy with the statement made by the AICC state affairs incharge RC Khuntia that N Uttam Kumar Reddy will lead TPCC till the 2019 polls. At first, they would make all possible efforts to make AICC high command change its decision. If their plea is rejected, they may cross over to the BJP, whose leadership is making repeated efforts to get the duo into its fold,” sources disclosed. Likewise, some of the seniors in Congress and TDP, along with disgruntled leaders in TRS are leant to be being lured by BJP leadership. “Modi government at is sure to retain power in 2019 polls. Besides this, our party is gradually becoming stronger which indicates that BJP will dictate the future politics in each state. After witnessing party’s growing popularity, leaders belonging to other parties have started showing more interest to join our party,” a BJP leader said.

Amit Shah to induct leaders into BJP
According to sources, the party wants to ensure that a good number of leaders from other political parties join BJP during the three-day tour of party national president Amit Shah from September 10 in TS. According to sources, BJP is focusing its attention on Congress leaders as it wants to first finish its national rival in the state. “In order to project our party as the viable political alternative to TRS in TS, we first need to make Congress weaker. That’s why it is our primary target,” a BJP leader commented.