SIDDIPET: With Telangana Joint Action Committee (TJAC) deciding to intensify its stir against the state government’s decision to procure more lands from local farmers for the construction of Konda Pochamma reservoir, police cordoned off the four villages that are likely to be submerged in the reservoir.

Additional forces have been stationed and barricades were erected on the roads leading to these villages and outsiders are not being allowed to visit these villages. Thus, police have increased surveillance in the submerged villages. They are also conducting thorough checks on roads leading to these villages. Government has increased the security especially after the visit of TJAC chief M Kodandaram and advocate Rachanareddy to Bailampur village two days ago. The duo had created awareness among the local farmers and also enquired about their problems, during their visit. 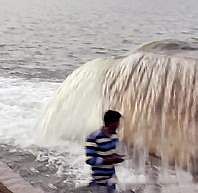 “Government feels that if outsiders visit the likely to be submerged villages, there may be problems in land acquisition. Hence, it deployed police force in all the four villages from Tuesday,” local officials said.
Thus, it seems the government is adopting the same tactics, which it had earlier implemented to crush the agitation by Mallanna Sagar oustees. Proving this, the police set up check points at the entrance of Bailampur, Mamidyala, Thanedarpally and Thanedarpally thanda. If any outsider wants to enter these villages, they have to show their Aadhar card and have to give details as to whom they are visiting. Villagers said that police have intensified picketing in the villages.

Officials said they had registered about 3,000 acres of land from the four villages. However, oustees said it would not be an easy task for officials to register another 1,000 acres of land. Against this backdrop, are trying to attract farmers by saying that CM had himself had interacted with farmers and had agreed to pay `12 lakh per acre as compensation and that Mallanna Sagar oustees were not given such compensation, so they oustees should not lose the opportunity.

‘Land for land’
The words of Prof Kodandaram has pushed the oustees again to thinking mode. TJAC chief had visited the submerging villages three days ago and alleged that the government was forcefully taking away the lands of farmers and not paying compensation as per law. It is incorrect to acquire lands, which irrigates three crops a year and if they are acquired, then land should be given for land, he added.

Ryots ask officials about compensation
Farmers who had already registered their lands to the government are worried as they have no idea whether the government was going to pay them. Oustees have begun questioning the local ruling party leaders who took them to RDO office. They  have been asking leaders to make them clear as to what compensation will they be paid for their houses and land. Oustees warned that if officials do not interfere
and make a clear announcement on compensation, there would be law and order
problem in the villages.

More from Telangana.
Now we are on Telegram too. Follow us for updates
TAGS
Konda Pochamma